Insulin costs force some patients to choose between paying their rent or mortgage and buying medication. 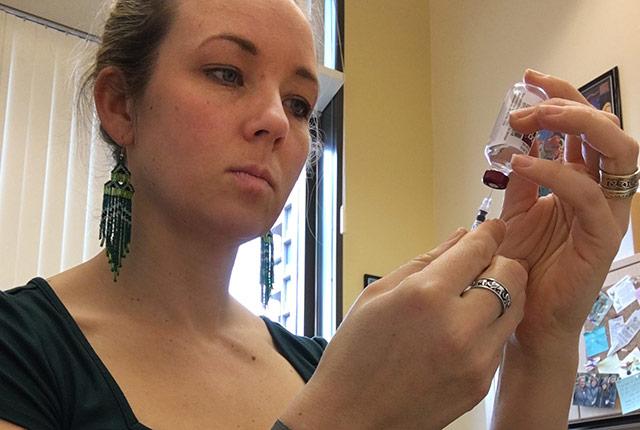 Dana VanBuecken and her husband had to take a good long look at their budget this year. Given that Dana’s insulin costs the family $600 a month, could they afford to send their four-year-old son, Remy, to preschool this year?

In the end, the Seattle-area family opted  for the preschool, but VanBuecken readily admits that she has friends and acquaintances facing starker choices. Rent, or pay for insulin? Grocery money, or pay for insulin? Can I skimp on my insulin shots until insurance kicks in?

“This all weighs heavily on my heart,” said VanBuecken, who works as a nurse practioner at the Benayora Research Institute in the diabetes clinical research program.

VanBuecken found out she had diabetes 13 years ago, after experiencing the classic symptoms  – thirst, weight loss – and discovering during a visit to urgent care that she had type 1 diabetes. She then became a patient of UW Medicine endocrinologist Irl Hirsch.

VanBuecken and Hirsch are tracking with interest a bill working its way through the Washington State Legislature this year that would cap insulin expenditures to $100 a month, and establish a state insulin supply so  those who are between jobs or  who have a low-income  can have access to insulin. The bill,  SB 6087, was sponsored by Sen. Karen Keiser (D-Des Moines). If passed, Washington would be one of four states either considering or which have passed caps on insulin prices. Colorado the first state to cap insulin prices at $100 a month last year.

A long-time advocate for diabetes awareness, VanBuecken attended the State of the Union February 4 in Washington D.C., as a guest of U.S. Rep. Suzan DelBene (D-Washington). While VanBuecken supports a national solution to insulin costs, she’s also a realist. Given the Congressional gridlock, controlling insulin costs at the state level makes sense, she said.

“Ideally, I think there needs to be national oversight in drug pricing,” she said, “but given that the House bill addressing this is stuck in the Senate, I think states need to take measures into their own hands.”

When VanBuecken was first diagnosed with diabetes the total cost for her insulin - at two vials a month - was $100 a month. Now that cost has climbed to $600 a month.

“The inability to afford insulin is one of the biggest concerns of my patients,” said Hirsch, who has written op-eds on the topic at a national level. “I’m not going to say that it comes up with every patient, but it comes up with a lot of them.”

Hirsch noted that some of his patients even find that co-pays for the drug are unaffordable.

“I have patients telling me that they are paying more for their insulin than they are for their mortgage,” he said.

There are many reasons given as to why a drug – which is absolutely necessary for those with type 1 diabetes to survive – is so expensive in the U.S., but not in the rest of the developed world.

Hirsch said a new study showed that even some third-world countries have better access to insulin than the United States does.  A recent study estimated that 26 percent of the diabetes patients in the United States ration their insulin, often with deadly outcomes. Another study, released this week, found that U.S. patients were turning to Craigslist to buy or sell insulin.