Long survival is “not common, but it’s not an absolute rarity anymore,” said a UW Medicine specialist in the disease. 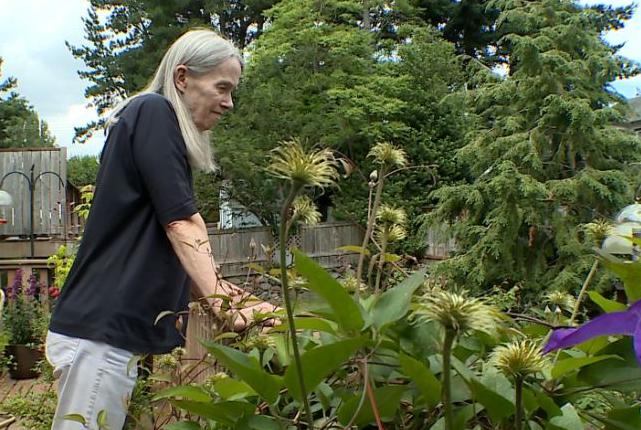 UW Medicine
Miggie Olsson savors a moment in her garden.

While weeding in her north Seattle garden, Miggie Olsson discusses how she, as a patient, became a unicorn.

She is 12 years out from a diagnosis of stage 4 pancreatic cancer. This puts her in the 1-3% of those patients who have survived five years and an even smaller fraction who have lived a decade more. The American Cancer Society doesn’t even have a chart for that.

Olsson, an avid runner and weightlifter, says it took years to figure out her condition. She received multiple misdiagnoses, among them Crohn’s disease, acid reflux and irritable bowel syndrome. Her symptoms – nausea, tiredness, abdominal pain – would emerge and abate.

After she followed her military aviator husband to Puget Sound, a UW Medicine internist finally diagnosed late-stage pancreatic cancer. She likely had a few months to live, she was told.

But Olsson continued to pursue life with energy, and enlisted the help of a creative UW Medicine oncologist. When she was not receiving chemotherapy, she attacked the weeds in her garden, creating a fairy land escape in her Seattle backyard.

“Gardening was my saving grace, really,” she laughs. “Just being out there weeding, it was a bit of a metaphor for killing the cancer.”

Three months of chemo reduced the tumor by half, much to the surprise of her oncologist. Then came a surgery, 26 rounds of radiation, and several more rounds of chemo over two years. The cancer was gone.

At 70, Olsson is still cancer-free. Dr. Michael Saunders, who monitored Olsson for years for signs of another tumor emerging, bid her farewell from care a few years ago.

“We weren’t seeing anything, so we stopped the yearly visits,” said Saunders, a gastroenterologist. “Hers is a great story, and one we want for more of our patients.”

Olsson’s story, as with news this summer that Jeopardy host Alex Trebek’s pancreatic cancer might be in retreat, are “not common, but it’s not an absolute rarity anymore,” said UW Medicine clinician and researcher Dr. Teri Brentnall.

Though it is still considered a highly lethal cancer, new treatments and drugs have lengthened survival for many patients. One reason may be the advent of chemotherapies based on a molecular analysis of the tumor. Some tumors have molecular makeups that make them respond better to specific drugs, she said, than they might to conventional regimens of gemcitabine or FOLFIRINOX.

“I don’t know if (Trebek) is getting targeted therapy, but the reports that he’s seen a 50% reduction in tumor size are very hopeful," Brentnall said. "The question now is how long this will continue, whether you diminish tumor growth or even stabilize it.”

For several reasons, pancreatic cancer is one of the most deadly cancers: It's typically not recognized until it’s it has fully developed. The pancreas, which helps digest food, is tucked away behind other organs, making anomalies harder to detect in a routine physical exam. Symptoms such as lower back pain and stomach pain often lead to other diagnoses.

The tumors are also surrounded by fibrous tissue, Brentnall said, which makes it hard for chemotherapy drugs to get inside the tumor and attack the cancer. Whats more, this cancer seems impervious to the immune system. “It’s invasive and evasive,” she said.

In her lab, Brentnall’s team examines blood-based biomarkers that could help doctors flag the cancer earlier, when it is more treatable. Saunders thinks this is the path to making real progress against this disease.

“There’s no medical therapy or dietary guidelines that have proven to decrease the risk of pancreatic cancer, so it really comes down to early detection,” he said. “And the ideal test would be a blood test.”

For Olsson, 70, the last decade-plus has unfolded slowly, unanticipated but welcome.  “It’s been a gift.”