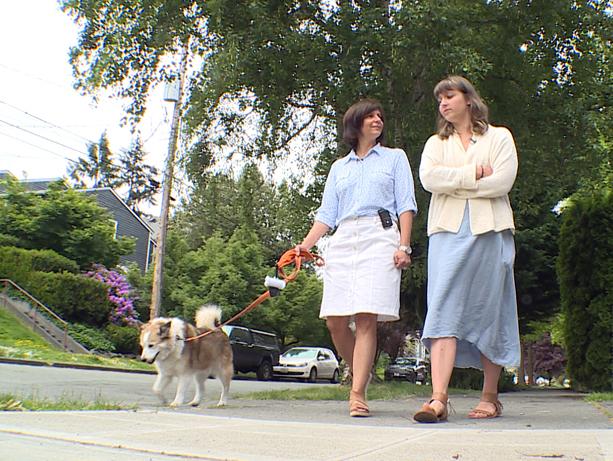 For once, she said, her dad didn’t have to check on her during the night.

Peyton Miller was reflecting on the biggest change posed by the new insulin pump that she’s worn for a month.

“He used to have to come in frequently to make sure my blood sugar was OK,” she said. About 75 percent of the hypoglycemic seizures occur at night.

As she spoke, Peyton’s pump began to chime, indicating her blood sugar was low. “Time to eat a banana,” suggested her mom, Nicki, as they relaxed in their Seattle-area home.

Mother, 46, and daughter, 18, have shared type 1 diabetes for the last nine years, which Peyton developed in elementary school. Both of their bodies produce little or no insulin, and their immune systems destroy the insulin created in the pancreas.

Last September, the U.S. Food and Drug Administration approved a hybrid, closed-loop insulin pump from Medtronic, which monitors blood-glucose levels with a sensor (usually placed on the abdomen).

Patients still need to calculate the appropriate insulin dose to take with a meal but between meals the sensor directs the pump to infuse appropriate doses of insulin to keep blood glucose in a healthy range.

“If I go low, this technology catches it” Peyton said. “If I go high, it brings more insulin in.”

While it’s not an artificial pancreas – both hope that will be the next technological advance – both agree that the pump gives them freedom they haven’t experienced before. And the family is sleeping better.

Nicki’s doctor, UW Medicine endocrinologist Irl Hirsch, has had type 1 diabetes himself since he was a child. He said the new pump is a significant step.

“I’m excited about this because there will be a large number of patients where this will dramatically improve their quality of life,” he said.

Email us if you'd like to speak with Dr. Irl Hirsch or Peyton and Nicki Miller.