A drug in Stage 2 clinical trial seems to slow or stop the progression of IPF. 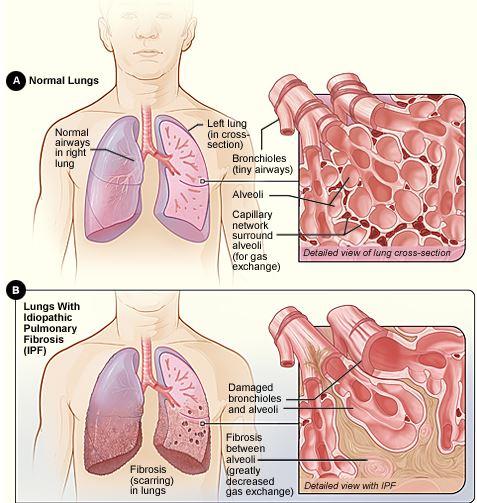 National Institutes of Health
Idiopathic pulmonary fibrosis damages the lung's alveoli and bronchioles in the lungs.

Use of a recombinant human protein in Stage 2 clinical trial has offered promising results and new hope for those suffering from idiopathic pulmonary fibrosis, or IPF.

Results of the randomized trial were published today in JAMA, and the lead author, Dr. Ganesh Raghu, presented findings at the American Thoracic Society meeting in San Diego.  UW Medical Center was one of the lead sites in the study.

The study comprised a randomized trial which included 117 patients with IPF. One group received intravenous recombinant human pentraxin-2 and the other received a placebo. Those who received the drug every four weeks for 24 weeks saw a slower rate of disease progression as measured in lung function tests and stabilized their walk distances covered over a six-minute time, the paper states.

“Stabilization in patients’ ability to function as assessed by walk distances has not been shown before,” said Raghu, director at UW Medicine's Center for Interstitial Lung Disease.

Patients were also able to tolerate the drug, the trial showed, and did not get sick from the treatment. Raghu said the slower rate of disease progression, stabilization in their walking capacities, and the tolerance of the treatment regimen by research subjects is significant.

“From the patients’ perspective, they care about their quality of life and their day to day activities,” he said.

The prognosis of IPF, a progressive fibrotic lung disease, is poor: Patients' five-year survival rate is 20 to 40 percent.

“The quality of life in many patients in poor, you are short of breath and limited in activities,” Raghu said. “They cannot walk as much as they did at the time of onset of the disease, and every three to four months, they sense  their levels of physical activity are less over time and their breathing deteriorates.”

Physicians are unclear about what causes the condition. Offering a drug that stabilizes the deterioration and allows the patients a better quality of life is meaningful, Raghu said. The drug appears to modulate lung inflammation and scarring process at a cellular level.