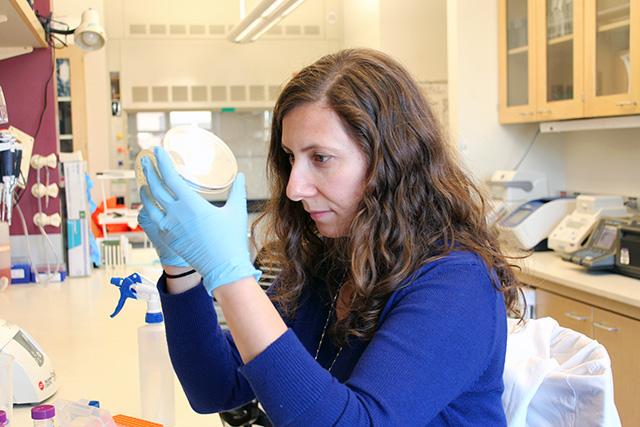 Chris Hsu
Pew Scholar Yasemin Sancak in her Department of Pharmacology lab, where she studies mitochondria and cell organelle interactions.

Yasemin Sancak, assistant professor of pharmacology at the University of Washington School of Medicine, today was named a 2021 Pew Scholar in the Biomedical Sciences.  She is one of 22 early-career researchers The Pew Charitable Trusts newly selected for this program. [See Pew news release.]

The scholars will receive funding over the next four years to investigate questions in human health and disease.  Since 1985, more than 1,000 other scientists have received awards from Pew  for their efforts to uncover new solutions to significant biomedical challenges.  Current scholars have opportunities to meet annually, share ongoing research, and share perspectives across the health sciences field.

Sancak studies mitochondria, the multi-purpose cell organelles. In addition to being power stations for energy production, mitochondria are central to metabolism, calcium signaling, innate immunity and cell death.   The proper regulation of mitochondrial is essential to maintain health. Malfunctioning or abnormal mitochondria contribute to many rare and common diseases. Among such disorders are some forms of cancer, neurodegenerative diseases, and certain heart problems.

The Sancak lab is working to understand how the diverse functions of mitochondria are regulated to answer the needs of the living cell. Her team is particularly interested in the role of calcium signaling in the control of mitochondrial functions.  For example, the entry of a tightly controlled amount.

One of the ways calcium enters mitochondria is through a fairly recently described transmembrane called a mitochondrial calcium uniporter. The Sancak lab has studied this uniporter in human mitochondria.

As a Pew Scholar, Sancak will expand her research in probing the interactions of mitochondria with other cell organelles.  She will look at the effects of disruptions in these interactions, and how they may point to possible targets for therapeutic interventions.

Sancak and her team have been working on a new biochemical approach to tag and isolate mitochondria that are close by other cell organelles.  Their method is also being used to study how mitochondria interact with the plasma membrane, which separates the inside of the cell from its outside environment. Earlier, Sancak received a Director’s New Innovator Award from the National Institutes of Health’s High-Risk, High Reward Program for her work on mitochondria and cell organelle interactions.

Sancak earned her undergraduate degree from the Department of Molecular Biology and Genetics at Bogazici University in Turkey.  She went on to obtain her Ph.D. from the Massachusetts Institute of Technology, or MIT, where she studied how cell growth was regulated.  She then joined a lab at Massachusetts General Hospital in Boston. There she made important findings about the calcium update machinery in mitochondria.  She joined the UW School of Medicine faculty in 2017.