The Shaw Foundation in Hong Kong has announced that the renowned UW Medicine researcher will receive the 2018 Shaw Prize in the Life Sciences and Medicine for her pioneering work in breast cancer genetics. 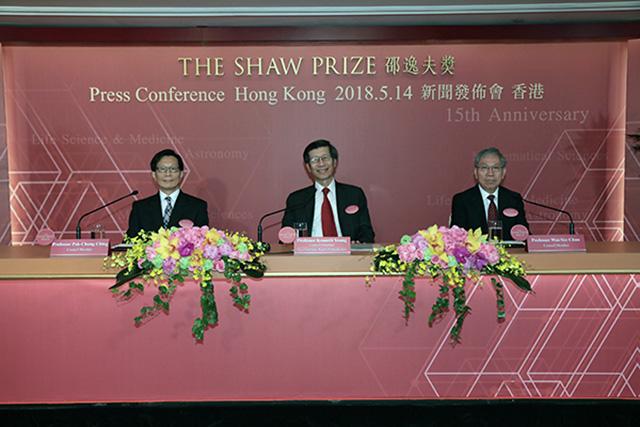 Shaw Prize Foundation
Shaw Prize Council members prepare to announce the 2018 prizes at a press conference May 14 in Hong Kong.

At the UW School of Medicine, King is a professor of genome sciences and is an American Cancer Society Professor in the Department of Medicine, Division of Medical Genetics.

Sir Run Run Shaw established the Shaw Prizes in  2002. The annual prizes are awarded for breakthroughs by scientists in the fields of mathematics, astronomy and life sciences.  The awards were created to recognize individuals, regardless of race, nationality, gender and religious belief, who have achieved significant breakthrough in academic and scientific research or applications and whose work has resulted in a positive and profound impact on humanity.

The Shaw Prizes will be presented at a Sept. 16 ceremony in China.  The prize carries a monetary award of $1.2 million.  Shaw was leader in the Asian television and film industry. Throughout his lifetime he provided philanthropic support to colleges, hospitals, science, the arts and many other charities.

King’s 2018 Shaw Prize recognizes her achievement in using mathematical modeling and other analyses to demonstrate in 1990 that a single gene on chromosome 17 played a role in many breast and ovarian cancers.  This “breast cancer gene” was later called BRCA1.  Its discovery changed the way medical scientists viewed the possible genetic contributions to common, complex diseases.   Earlier, many medical scientists had disregarded her efforts to try to find such connections.  After her remarkable discoveries, the techniques King developed for mapping BRCA1 were adopted by many scientists to study numerous other disorders.

King has been a member of the UW medical school faculty since 1995.

Watch the video of the Shaw Foundation press conference announcing the 2018 Shaw Prizes: