Growing new human livers is a long-term goal of bioengineer Kelly Stevens as she studies this organ’s development. 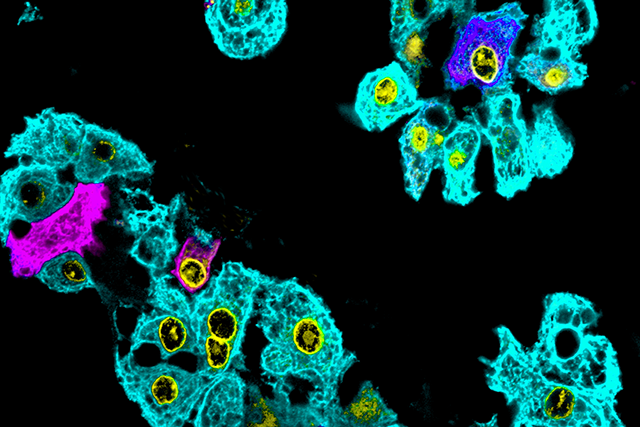 How human livers form and grow, and the complex cues and forces influencing their development, is a scientific interest of UW Medicine regenerative medicine researcher Kelly Stevens. Knowledge and techniques emerging from such research could led to better understanding of and treatments for liver disease.  Even beyond that, such advances could foster hope of eventually growing new materials or organ-like structures to replace damaged liver functions.  At present, the lack of sufficient, suitable organs for transplant is a critical problem facing many people whose lives are threatened by liver failure.

To support foundational biological studies to find solutions for liver disease, The Paul G. Allen Frontiers Group recently named Stevens an Allen Distinguished Investigator. She is one of 23 scientists nationwide newly selected for this research funding.  They represent several fields in neurosciences, immunology, and synthetic biology, but share the promise of paving new avenues in biomedical science.

Stevens will be part of the Mammalian Synthetic Development cohort, which is exploring tissue and organ engineering.  Stevens is an assistant professor of bioengineering, a department jointly run in the University of Washington College of Engineering and the UW School of Medicine.  She is also an assistant professor of laboratory medicine and pathology in the UW medical school.

Stevens will be receiving a 1.3 million, three-year grant from the Paul G. Allen Family Foundation as recommended by The Paul G. Allen Frontiers Group, which is a division of the Allen Institute.  The funding will allow her research team to expand on previous achievements in her lab.  Her lab and its collaborators are recognized for 3D bioprinting and for growing and finding ways to sustain organoids.  These lab-produced, living research tools can carry out some of the physiological activities, responses and even disease processes of the organs they represent.

Stevens mentioned that she and other scientists in her field have a dream of building human organs and tissues to replace parts that are losing their critical functions.  She is one of the investigators in the UW Medicine Stem Cell and Regenerative Medicine Institute, in which scientists from a variety of disciplines are seeking new ways to repair damage in the human body.

Stevens’s lab has taken on a difficult but intriguing challenge. Livers are highly complex organs that serve many roles and perform about 500 functions.  Unlike many other parts of the human body, healthy livers can, at least partially, re-grow to repair themselves.  However, several diseases can squelch this regenerative capacity.

As part of looking for ways to regenerate livers or create new ones, scientists are attempting to learn how livers form in the first place. They are trying to obtain the organ’s construction plans and procedures, and understand its building site environment.

Stevens will be exploring the genesis of the human liver and the factors that shape the development of this organ.  In addition to genetic instructions, livers in various stages of development are likely to also have several other factors – mechanical forces, environmental conditions, blood supply and nutrient availability, chemical commands, cell-to-cell and intracell signaling, and more – that affect their emerging architecture and performance.  These are some of the factors that will be on the Steven’s lab to-do list for observation and experimentation.

The Stevens lab plans to design a set of synthetic technologies that can mimic in the lab what occurs in and around the liver during its various stages of development. The hope is that these technologies, plugged in at appropriate times, will encourage primordial cells to change into different liver cell types; send, receive, and act upon signals; prune unneeded or depleted cells; and perform other roles necessary to organize functioning liver tissues and structures.

Some aspects of this project will be done in collaboration with the Ludovic Vallier stem cell lab at the University of Cambridge and the Robert Schwartz lab at Weill Cornwell University. Schwarz is a clinician who also studies the formation of the blood vessels required to supply nutrients and other vital needs to developing tissues and also take away waste.