How to measure brain damage? A yardstick, of sorts, for MRI

How to measure brain damage? A yardstick, of sorts, for MRI 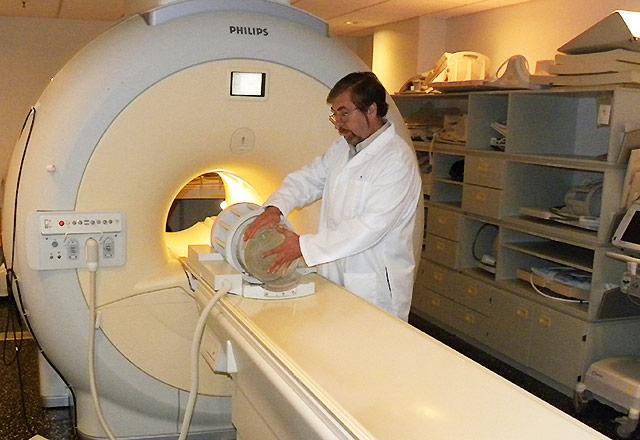 Multiple sclerosis, an autoimmune disease that affects the nervous system, is known for widely variable symptoms and severity.  A person may be totally asymptomatic or have a mildly annoying case that, in a span of years or decades, becomes brutally disabling, undermining mobility and other bodily functions.

In the future, the method will enable researchers and clinicians to track myelin content changes not only in MS patients but also in people whose myelin is damaged by stroke or traumatic brain injury, said Yarnykh, a research associate professor at the University of Washington School of Medicine.

“For instance, with a stroke there is a chemical death of brain tissue – neurons, glial cells – and disruption of myelin,” he said. “As neurons recover, axons start to grow and establish new neural connections. There’s the question of how to measure these competing processes of demyelination and remyelination as the brain tries to heal.”

Yarnykh has worked to design myelin imaging protocols that will work with Siemens, Philips and General Electric scanners, which represent the vast majority of MRI instruments in U.S. hospitals.

Two weeks ago, Yarnykh learned he had won a National Institutes of Health High-Impact Neuroscience Research Resource award of $700,000 to make the myelin-measurement technology widely available to scientists and clinicians over the next four years.

“I’m a quarter of the way up the mountain,” he said. “In addition to the imaging protocols themselves, we need to put this method in the hands of end-user MRI technicians, so the software needs to be user-friendly and downloadable. We’ll have to run quality-assurance procedures and provide some test objects to show that the method works correctly on each MRI machine.”

With MS patients, myelin measures could indicate the effectiveness of therapies, he suggested. In conditions such as stroke and brain injury, measuring myelin’s revival could be a signal of general neural tissue recovery.

“There’s also the potential to measure brain development in infants,” Yarnykh said. “When a child is born, its brain contains a very small amount of myelin – less than 10 percent of the amount in an adult.  And we know myelin develops most rapidly during the first year of life. So if there is concern about a child’s neural development, this could provide a critical measure. We could develop fundamentally new, measurable criteria that correspond to the normal brain development patterns.”