The device has been essential to delivering a universal flu vaccine being developed at UW Medicine. 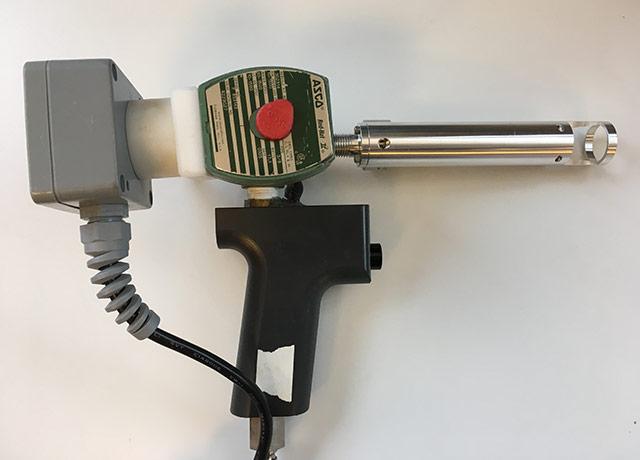 The idea for a "gene gun" that delivers a vaccine into skin cells traces its provenance more to wheat and tomatoes rather than HIV and influenza.

Deborah Fuller, a professor of microbiology at the University of Washington School of Medicine, has been working on the concept of a gene gun for more than 20 years.  This research is in tandem with the development of a universal flu vaccine, which would in theory eliminate the need for an annual flu shot.

The DNA vaccine in Fuller’s lab was engineered by using genetic components of influenza virus – the conserved areas – which do not change. This is one way Fuller’s DNA vaccine gets around the genetic drift, or changes, that occur in influenza strains from year to year, and challenge for clinicians who combat the disease.

“Getting the vaccine into the cell was always the big challenge,” she said.

Enter Fuller’s gene gun. The technology has been used for years in genetically engineered plants. Fuller used her experience working with plants at a Wisconsin biotech company to take the idea and redirect it to injecting DNA into mammalian cells for vaccine research in early 90s.

In Fuller’s concept, the gene gun painlessly delivers the DNA vaccine into the skin cells, and then prompts the cells themselves to produce antigens, which then instruct the host make immune responses that go out and find and kill the virus. The vaccine itself is attached to micron-sized gold particles, for weight and ballast. A puff of helium gas propels the gold particles carrying the DNA vaccine directly into the cells of the skin.

The working model Fuller uses in the lab looks like something out of a Star Wars movie – sort of a ray that currently makes a loud popping sound as it sends the DNA vaccine into your skin. The model currently in the design stage for use in clinics is a sleek, white cylinder which propels the vaccine into the cells of the skin’s epidermis, minus the loud pop. Eventually it will incorporate additional engineering modifications to expand its dosing range, particle penetration into human skin cells and its efficacy.

[Watch a video of Jim Fuller explaining the device's function.]

Deborah Fuller co-invented the gene gun used in this research, and co-founded Orlance, a startup working on engineering a clinical version of the DNA vaccine delivery system and commercializing it for vaccines, including influenza. She co-founded the company with microbiology colleague Jim Mullins and her graduate student, Paul Munson, who will be defending his Ph.D. this year, will be joining the company as its first employee. Both the vaccine and the gene gun will likely be ready for commercial use in about five years, she said.  She is currently working to secure NIH grants for further research.

Airlift Northwest opens new Pasco, Wash., base
Phthalates linked to changes in gene activity in placenta
Unraveling the mystery of why we overeat
NIH awards $10 million to study concussions in schoolkids
Men should check their genes for prostate cancer risk
END_OF_DOCUMENT_TOKEN_TO_BE_REPLACED