A therapy developed at UW shows promise in its first test in young boys who have an inherited deady muscle disease. 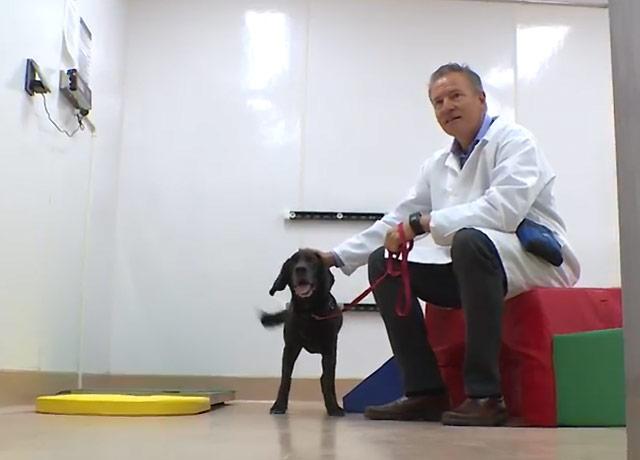 Randy Carnell
Dr. Martin Childers with one of the dogs successfully treated for the muscle-wasting disease.

Favorable interim results have been announced in a small clinical trial of a stem-cell therapy to treat patients with a rare, deadly disease called myotubular myopathy.

Drs. Martin Childers and David Mack, researchers at the University of Washington School of Medicine, conducted preclinical gene-transfer studies of the therapy at the UW Medicine Institute for Stem Cell & Regenerative Medicine.  Their research showed that the therapy successfully treated dogs with a form of muscular dystrophy. That same therapy is now being tested in the clinical trial of patients.

[Access downloadable video of the doctors discussing the interim finding.]

Most patients with the inherited disease do not reach 2 years old, said Childers. Several centers across the United States are participating in the trial, which consists of 12 patients up to 5 years of age. The patients are being evaluated for functional measures such as the ability to roll over, hold up their head and move their arms, as well as their ability to breathe.

"Initial results from the first patient were very encouraging," Childers said. "The patient, who was very sick and very weak, is now reaching normal milestones and normal measures of function."

Tests led at UW previously showed that the therapy restored muscle strength and prolonged lives in dogs that had a similar inherited neuromuscular disease.

Myotubular myopathy arises from a mutation in genes that normally make a protein, called myotubularin, essential for proper muscle function. The disease causes fatal muscle wasting. Both dogs and boys with the disease typically succumb in early life due to breathing difficulties.

A 2017 paper reported that diseased dogs treated with a single infusion of the corrective therapy were indistinguishable from normal animals one year later.