UW Medicine’s 1st Alaskan recipient of a living-donor liver graft heads home after a lifesaving gift from his nephew across the country. 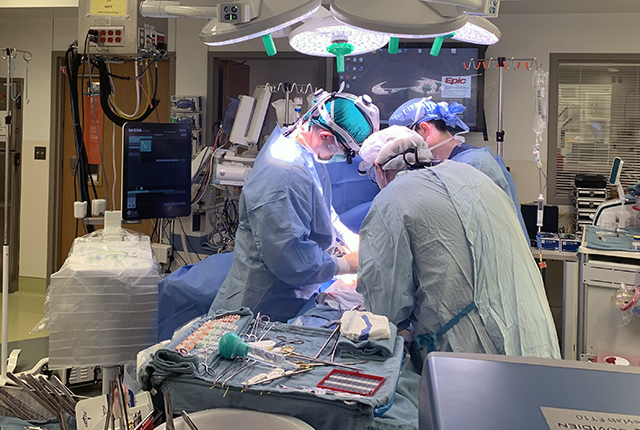 People who get the organ-donor designation on their driver’s license are making a decision to offer lifesaving gifts after they die.  Put another way, most people will never decide whether to donate an organ during their lifetime.

That opportunity came this year for Doug Post of Arlington, Virginia. The 23-year-old data scientist put his life on hold to fly to Seattle twice – first to submit to a battery of health tests and then to undergo surgery on March 4 to have a lobe of liver removed.

Those selfless acts made his uncle, Tim Seafler, 54, UW Medicine’s first patient from Alaska to receive a living-donor liver transplant.

“I was apprehensive about asking anyone to donate an organ, especially a nephew,” Seafler said. “Even though I trusted the doctors with my life, I was still scared for him. I mean, he’s my nephew. I was surprised he would take that upon himself, for me, but he’s the reason I’m still here.”

Seafler will be on a flight tomorrow to Anchorage, eager to sleep in his Eagle River home for the first time since early March. Post has been home for weeks, returning to his research job at Georgetown University.

He is conscious of the significance of his decision to donate an organ but downplays praise about it. For him, the rationale was clear.

“The more I read about living donors, it seems that the chances of serious complications are really low, like 1-2%,” Post said. “That was a big part of my decision. I also realized transplant was the only way that Tim would get to live a comfortable rest of his life – in exchange for me losing a couple of weeks of time and not getting to drink alcohol for three months. The advantage of the tradeoff was clear. In my mind, it was just the right thing for me to do.”

Seafler’s MELD (Model for End-Stage Liver Disease) score, the calculation of factors that determines placement and position on the liver-transplant waiting list, was unlikely to ever be high enough to qualify him for a deceased-donor organ – or at least not until he would be too medically fragile to fly from Anchorage.  As well, living in Alaska precluded Seafler from being a ready stand-by candidate for a donor organ that, for some reason, could not go to its first-priority recipient.

Even though his postoperative recovery in Seattle hit a few snags, Seafler raved about how the transplant has starkly improved his cognitive clarity.

Brain fog is common among people with liver disease. Seafler, a U.S. Air Force retiree, was diagnosed more than 10 years ago with nonalcoholic fatty liver disease, a progressive condition that led to his liver failing in March 2020.  For years, he said, the disease gradually sapped his energy and impaired his concentration. Simple conversation had become like solving a puzzle.

“As soon as I woke up after surgery, I felt focused. I looked outside and saw Husky Stadium and I was amazed at how sharp it looked – like 4K (resolution). When someone said something, the meaning of the words registered right away; I didn’t have to think about it.”

UW Medicine surgeons have performed 13 living-donor liver transplants, more than any other healthcare system in the Pacific Northwest, according to the U.S. Organ Procurement and Transplant Network.