“It’s all the same system,” said Dr. Albert Merati, a UW Medicine otolaryngologist.  “Things that irritate your nose or throat would also irritate your ears.” 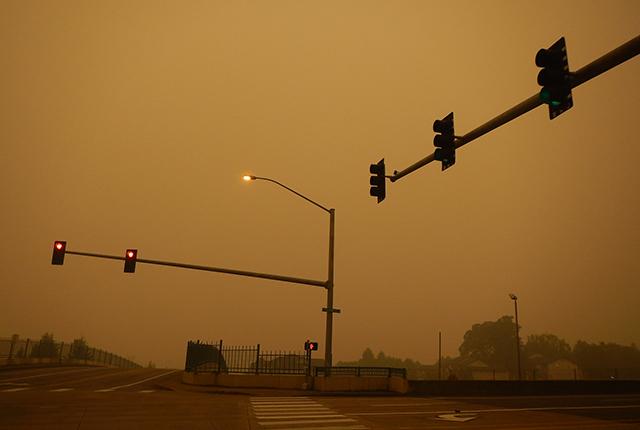 SoulRider.222 / Eric Rider via Flickr
Wildfire smoke on Sept. 11, 2020, at a traffic intersection in Harmony, Oregon.

The wildfire smoke that rolled into the Pacific Northwestarea is still thick and may not blow away this week.

Some patients are surprised to learn that the ears, nose, and throat are connected, said Dr. Albert Merati, medical director of otolaryngology at UW Medical Center – Montlake.  “It’s all the same system,” he said. “Things that irritate your nose or throat would also irritate your ears.”

Air has been poor, reaching toxic levels over the weekend from wildfires in Washington, Oregon, and Califorinia.  On Tuesday the Puget Sound Clean Air Agency reported that outside air quality was "unhealthy" or "very unhealthy."

“The lining of the nose and ear particularly have a certain type of clearing mechanism that is very vulnerable in terms of its response to outside irritants, such as tobacco smoke, secondhand smoke and profound exposure such as the environmental challenges we’re facing today with the smoke that’s in the air,” Merati said.

So what can be done to relieve discomfort? Stay inside if you can, and use an air purifier in your home or office, if possible.  If you must go outside, limit exposure. Drink water to increase circulation and flush your system. Some people may wish to irrigate their nasal passages, he said. It would also benefit to limit drinks that dehydrate you, such as alcohol, carbonated beverages coffee, and teas, he noted.

Merati expects to see an increase in ear infections in the following weeks, especially among children. He also wonders if the smoke might expose other pre-existing but asymptomatic conditions.

“Even after the smoke comes and goes, I wonder if there will be people who find they have persistent symptoms – that it wasn’t the lingering effect of the smoke but rather (that) this experience unearthed a problem that was already brewing,” he said.  Patients who continue to have symptoms after the air clears – such as nasal congestion, pain, breathing difficulty, sore throat – might consider talking with a primary-care physician or otolaryngologist.

[Editor's note: The photo by Eric Rider was used under the terms of Creative Commons license. The original photo was cropped to fit this page.]