Genome sciences team creates curriculum that makes information personal to youths. It's being tested in 50 classrooms. 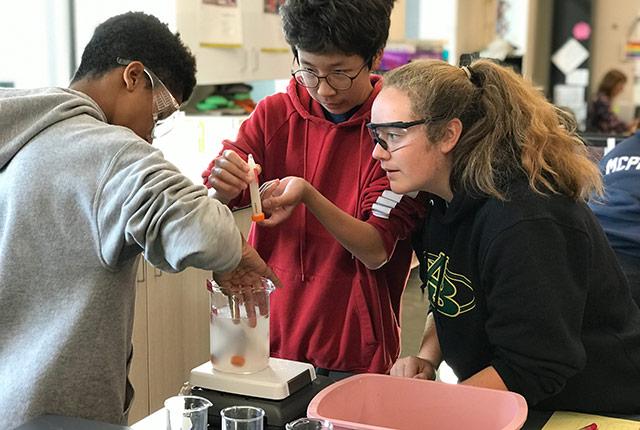 For Lola McPherren, learning about diabetes is personal. The Juanita High School ninth-grader had a grandfather with diabetes. She recalled that he gave himself a shot of insulin before a meal, and that he also never really changed his diet to help control the disease. He died in February.

“I think this all made me appreciate my health more and make me want to take better care of myself. So I pay attention to what I put in my body,” McPherren said as she watched yeast fizz in a test tube.

She was taking part in a high school class lesson developed by the Genome Sciences Education Outreach program at the University of Washington School of Medicine.

Program director Atom Lesiak said the team has worked for two years to develop and test-run the curriculum at sites throughout Washington state. So far the course has been presented in 50 classrooms, including McPherren’s, this fall.

The project was funded with a five-year, $1.2 million grant from the National Institutes of Health. The team wanted to focus on a disease with environmental and genetic risk factors as well as broader social relevance, and type 2 diabetes seemed a perfect fit. They developed a curriculum that could be taught in biology and health classes so students could learn about diabetes from different perspectives and become familiar with how genetics and diet affects their lives.

“Kids aren’t generally making the choices of what they eat at home, and we hope this curriculum might help empower the students to make a change,” Lesiak said. The goal for next year, he said, is to expand into more classrooms and develop new lessons.

About 30 million people in the United States live with diagnosed or undiagnosed diabetes. About 9% are children, teens or young adults. Ethnic minorities are seeing the sharpest increase in diabetes rates, according to the Centers for Disease Control and Prevention.

McPherren’s biology teacher, Jodie Spitze, said teaching students about a real-world issue, rather than “Here is what glucose is,” is much more compelling for them. And the lessons stick, she said. “The big goal is to understand how your body balances something. So that’s the science takeaway I want. And ultimately I want them to understand that there are a lot of things that can be done to reduce type 2 diabetes.”

There is already evidence that the class is changing behaviors,” said Joan Griswold, who helped develop the curriculum. One student at Mount Vernon High School began to adjust his own lunch choices, steering away from the cookies and focusing on more healthy snacks; he started packing his younger brother’s lunch as well, Griswold recalled.

Said another student: “It’s cool to learn how preventable [type 2 diabetes] was. I pretty much thought that if it was in your genes then you were going to get it no matter what, but there are so many ways to prevent it.”

[Download broadcast- and web-ready versions of the video below.]