Designer's idea is catalyst for UW Medicine, Engineering and other teams to speedily produce COVID-19 protection. 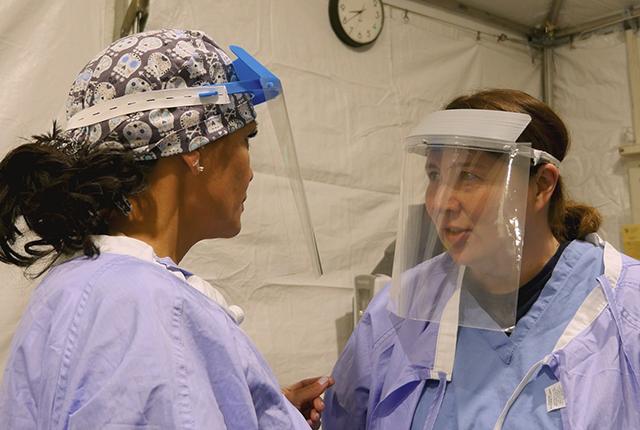 When the first U.S. COVID-19 patient emerged in Washington, UW Medicine, as the state’s foremost provider of advanced medical care, was thrust into the role of trailblazer. Its clinicians and researchers have since mustered a speedy and sometimes ingenious response.

Two examples: Facing a national shortage of diagnostic tests, virologists here developed a novel COVID-19 assay, ensured its accuracy, and earned the Food and Drug Administration’s OK to test patient specimens – all before February had ended. In parallel, clinicians developed a protocol for drive-through COVID-19 screening that shrewdly kept patients isolated in their cars. The site at UW Medical Center-Northwest opened March 6, likely the first of its kind in the nation.

More recently UW Medicine was contacted by a local craftsman whose idea and sense of urgency perfectly matched the health system’s needs and the UW’s innovative spirit. It also gave rise to a speedy cross-campus collaboration.

Over the drone of 3D-printers at his Redmond studio, Tim Prestero explained his impetus to offer help pro bono: “It’s amazing what you can accomplish if you don’t care who gets the credit,” he said, paraphrasing Harry Truman. “We’re a nonprofit; this is what we do,” he said, describing his company, Design That Matters.

On March 19, Prestero 3D-printed horseshoe-shaped strips of plastic as the “cradle” of a face shield to protect front-line caregivers from COVID-19. The next day the three-piece prototype — cradle, transparent shield, and elastic band — were with UW Medicine stakeholders.

“Tim wanted to make something happen quickly,” said Vanessa Makerewicz, infection-control manager at Harborview Medical Center. “He had dropped samples off with our supply chain Friday and I saw them that night. Sunday, I brought them into the hospital for the nurses to see. We gave Tim feedback that the face shield had too much of an opening along the forehead.”

Prestero returned two days later with an updated version that sported a visor. It was perfect. Another cool feature: the cradle’s three protruding prongs accept 8.5×11-inch transparencies like those found at office supply stores. These transparencies become face shields with enough vertical cover that, when properly disinfected, allow nurses to wear the fabric masks that cover their mouth and nose for a whole day instead of just one patient visit.

The face shield’s next stop was with Dr. Rob Sweet, chief of health care simulation sciences. He chairs an innovations committee that needed to choose one project among several prospects to rapidly manufacture.

“It was an easy choice,” Sweet said. “This design was so simple, and it already had undergone preliminary testing at Harborview.”

Sweet also engaged Dmitry Levin and Dr. Beth Ripley to expedite the device’s regulatory approval. Levin, who runs a 3D-printing lab in the Heart Institute, ensured that the face shield could handle routine use and offer adequate splash protection. He wrote documentation required for submission to the National Institutes of Health (NIH).

The NIH sent the design to the Veterans Healthcare Administration (VHA), where Ripley kept the project moving apace. She’s a UW radiologist who sees patients at the VA Puget Sound and also chairs the VHA’s advisory panel on 3D printing. She oversaw clinical review of the face shield, which became one of the projects evaluated on a fast track.

With the VA Puget Sound’s stamp of approval, the NIH put Prestero’s face-shield design into the public domain as a “recommended” device, freely sharing its specifications with organizations worldwide. This happened on March 28, just eight days after UW stakeholders saw the first prototype. The design page’s sudden popularity initially crashed the NIH 3D-printing site’s servers, Prestero said with a laugh.

The face shield’s journey was on the radar of Colleen Carroll, maker in residence at the Paul G. Allen School of Computer Science & Engineering and associate director of the Center for Digital Fabrication (DFab). She joined others across UW’s three campuses reaching out through DFab’s network of digital fabrication researchers, staff, and students.

“The main thing that’s been so cool for me is how truly cross-university it’s been,” Carroll said. “We’ve pulled the entire campus together in a way I’ve never seen before. And it happened so fast.”

Jumping into action and harnessing all 37 3D printers in UW HFS Makerspaces, program manager Derrick Van Kirk says he’s found reward in helping the relief effort. Three undergraduates and a graduate student have helped manage the production line, and the labs have been coordinating with each other to maximize output.

Wherever 3D printers exist on campus — be it UW Tacoma, UW Bothell, the Global Innovation Exchange, and more — the machines all have been printing the face shield design. More than 70 printers have produced more than 1,000 cradles, Carroll said. Given that each cradle takes 3.5 hours to create — adding thin layer of plastic with each pass of the printer head – the time investment has been enormous.

“It’s been the most gratifying two weeks of my professional work life,” Van Kirk said. “We have to get it done. It’s been a lot of hard work, but super gratifying.”

“People at the hospital are very excited about it,” said Harborview Emergency Department nurse Amy Leah Potter. “We can wipe them clean and let them dry, same as with our normal PPE, but we can also change [the transparencies] out if they get scratched or damaged, so it’s a lot more reusable.  It’s incredibly impressive that somebody came up with this to allow us to do our jobs better.”

This was written by Brian Donohue, Jackson Holtz and Sarah McQuate.