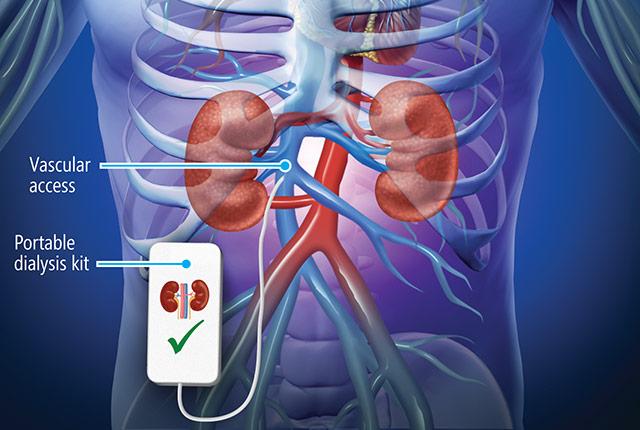 Center for Dialysis Innovation
A conceptual illustration of the wearable dialysis unit being developed by the CDI.

In 2014, Chuck Lee of Bothell, Washington, was among seven subjects in a clinical trial of a “Wearable Artificial Kidney.” The proof-of-concept dialysis device was an exciting idea for patients like Lee who have irreversible kidney failure and whose survival depends on thrice-weekly clinic visits to be tethered to a large blood-cleansing machine for four or five hours.

At 11 pounds, the prototype trial device was clunky, and it had technical challenges. But Lee loved it because it allowed him to consume tomato juice, Cheetos and other favorites long gone from his diet, and it gave him freedom to walk around the hospital unit as dialysis took place.

The device represented the first significant innovation for those patients since the 1960s, when the University of Washington pioneered dialysis as a life-sustaining therapy.

Eager to pursue the idea of wearable dialysis, the UW Center for Dialysis Innovation (CDI) launched in 2017. It’s composed of doctors and engineers who are rethinking the dialysis circuit and hoping to make wearable dialysis a reality for kidney-failure patients.

Today the CDI was honored as two of its ideas were chosen as finalists in the KidneyX Redesign Dialysis competition, a national contest. Contest sponsors are the U.S. Department of Health and Human Services and the American Society of Nephrology.

“We’re excited to be recognized. It was competitive – over 160 submissions, from which 16 were selected,” said Kassandra Thomson, who directs the CDI’s efforts to translate research into clinical practice. Today she is in Washington, DC, presenting concepts along with other contest honorees.

Today’s winners are invited to develop their ideas into prototypes and to compete in the second phase of the competition, in which up to three winners will be awarded $500,000 each next year.

Thomson described the CDI’s two submissions. One described the vision for a next-generation wearable dialyzer, depicted as a compact device that will allow patients to receive dialysis 24/7. It will be water-efficient, enable complication-free blood access, and more fully model kidney function. Mostly, the device would afford mobility and allow patients to live lives more fully.

The other submission is a new vascular access graft. Blood-vessel access has been called the Achilles’ heel of hemodialysis. Current vascular-access technologies have a finite lifespan; patients suffer repeated needle sticks and, after many repetitions, the points of access can fail and complications can ensue.

“The new arteriovenous (AV) graft we are designing will be resistant to repeated needle punctures, reduce blood clots that might form inside the graft, and induce blood vessels to grow into the graft, so that it becomes more like a piece of living tissue," Thomson said. “The goal is to dramatically improve outcomes and the patient experience with their vascular access, addressing unsolved problems that have plagued patients for decades."

Kidney disease has become a staggering health burden in the United States, affecting 40 million people. More than 700,000 of them have kidney failure, which means being on dialysis, getting a transplant, or dying.

“It’s time for the next big advance,” Thomson said, “and we want it to happen here.”