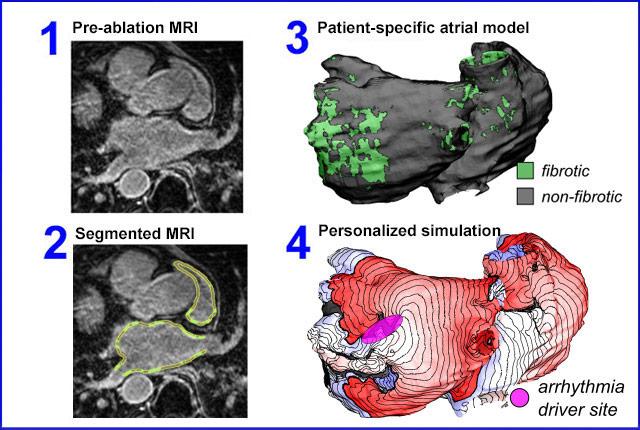 Patrick Boyle
Images of the computational process to identify persistent AFib ablation targets. An example target is shown in magenta in panel 4.

All 10 patients experienced enduring relief from symptoms in a test of a novel, non-invasive approach to custom-tailored treatment of persistent atrial fibrillation, an irregular heartbeat that dramatically raises people’s risk of stroke.

The proof-of-concept findings are reported today in Nature Biomedical Engineering. The study’s co-lead author is Patrick Boyle, a University of Washington assistant professor of bioengineering. The clinical study occurred while he was at Johns Hopkins University. [See Johns Hopkins' news release and video.]

Atrial fibrillation, or “AFib,” is an uncoordinated rhythm disturbance in the heart’s upper chambers; it stems from chaotic electrical impulses not associated with a normal heartbeat. A standard treatment involves guiding a catheter into the heart and ablating (deadening by cauterization) areas of tissue thought to be creating or sustaining the unhelpful impulses.

Often ablation resolves the problem. Some patients though, have fibrotic tissue in their heart – due to genetics or disease or previous ablation attempts. Boyle likened this tissue to a “swamp” because it slows and weakens conduction of electrical impulses. Since conventional ablation approaches do not target fibrotic tissue, these patients tend to undergo multiple failed ablations, raising the potential for peril.

At the crux of the issue is the method by which cardiologists decide which areas of heart tissue to ablate.

Currently this decision is based on an invasive “mapping” diagnostic procedure in which a catheter is guided to the patient’s heart to test areas for abnormal electrical conduction, which are recorded, yielding a guide for cardiologists doing the subsequent ablation.

Boyle and Johns Hopkins colleagues had previously used computational analysis of persistent-AFib cases to develop and validate a noninvasive approach to identify targets. Their process involves an MRI-based, virtual 3D model of the patient’s heart, to highlight fibrotic and non-fibrotic tissue. The patient’s own heart model is annotated with the information of previous patients’ ablation treatments. Virtual ablation tests are run on the model, leading to a map of the tissue sites predicted to be drivers for arrhythmias.

“We kind of hijacked the existing mapping system,” Boyle said. “We had access to patients’ de-identified medical images, so we made (for each patient) a geometric model marked with data from simulations we ran. Getting that process to work was a huge engineering endeavor.”

Pilot-study patients were followed post-procedure for a range of 197 to 543 days. None of the 10 experienced an episode of afib during that time and only one underwent another ablation procedure, for atrial flutter and paroxysmal (i.e., episodic) AFib, which differ from the targeted rhythm condition.

“One of my goals at UW is to try to make this type of technology more accessible to clinicians,” said Boyle, who leads the Cardiac Systems Simulation lab. “The simulation and model reconstruction and analysis are complex. You need a supercomputing system and a team of people, including an engineer, ready to drop everything when a patient is identified. That’s not feasible for most cardiology practices. But if the technology were adapted and lived in a publicly available cloud-computing platform, then doctors anywhere could access it. That’s my vision for the future of this research.”