Cocoonlike patient device to be tested in mock emergency

Cocoonlike patient device to be tested in mock emergency 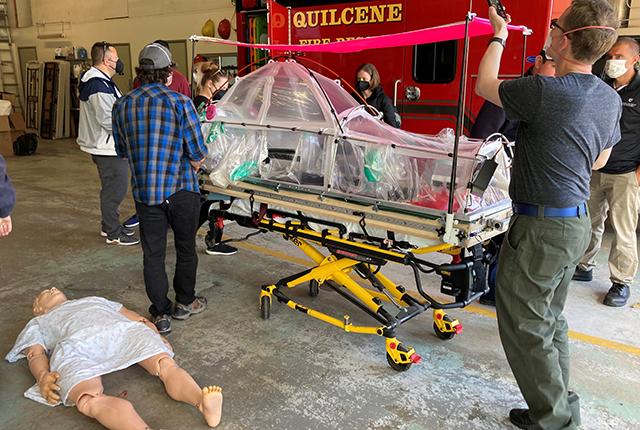 Images courtesy of the Global Center for Health Security, University of Nebraska
The patient-isolation system, atop a gurney, will be tested in a simulation involving a medical manikin.

In mid-September, first-responders in East Jefferson County, Wash., and a medical crew from Airlift Northwest will conduct an exercise to test a device intended to protect healthcare workers from patient-acquired infections during transport by ground or air ambulance.

Jefferson County residents should not be alarmed at the increased emergency-vehicle activity during the week of Sept. 12, said Dr. Laura Evans, a critical-care specialist with UW Medicine in Seattle. The simulation exercise and device test are a joint effort of the East Jefferson County Emergency Medical Services, UW Medicine, Airlift Northwest and the University of Nebraska Medical Center (UNMC).

The device prototype being tested is a clear, cocoonlike structure that surrounds a patient but enables clinicians to check vitals and administer care. It was developed by the UNMC Global Center for Health Security in conjunction with engineers at Otherlab, based in San Francisco.

“The COVID-19 pandemic has shown that the U.S. healthcare system has vulnerabilities in its infection-control measures,” said Dr. Jana Broadhurst, who directs the Nebraska Biocontainment Unit Clinical Laboratory at UNMC. “The ISTARI (Isolation System for Treatment and Agile Response for high-risk Infections) is designed as reverse protection for healthcare teams: Instead of the provider wearing personal protective equipment, with the ISTARI we wrap the PPE around the patient.”

The exercise will not involve transporting live patients, but a manikin, or medical mannequin.  In separate simulations, a manikin at the Quilcene Fire Department will be conveyed in an ambulance and an Airlift Northwest helicopter – each outfitted with an ISTARI prototype transport envelope. Medical transports of extended durations will give the crews a chance to work with the manikin through the device, and then the manikin will be returned to a simulated emergency department back at Quilcene Fire Department.

The purpose is to get immediate feedback on the device’s ease of use and perceived value from emergency medical technicians, flight crew, medical staff and infectious-diseases specialists.

The ISTARI devices were designed to facilitate patient care and limit infection and viral spread in distinct settings: during pre-hospital transports, in established healthcare facilities such as emergency departments, and in low-resource areas and field hospitals.

Over the past two years, Evans and colleagues at UW Medicine have worked with UNMC and Otherlab to test devices, leading to design improvements and to partnerships with pre-hospital providers.

The test is funded by a Centers for Disease Control and Prevention initiative aimed at strengthening infection-control protocols.