Lisa Novak had been told that a coronary artery was too plaque-filled to be repaired with a stent. Turns out it wasn’t. 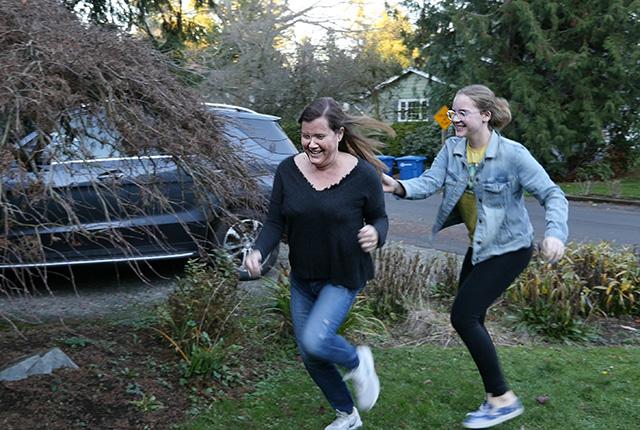 Randy Carnell / UW Medicine
A rejuvenated Lisa Novak plays Wiffle Ball with her kids in November in their neighborhood near Seattle.

In late 2017, Lisa Novak, 44, complained about fatigue to her primary-care doc, who responded, ‘Of course you’re tired, you have three kids and work full-time,” recalled Novak, a realtor on Mercer Island, near Seattle. “They’d check my thyroid and send me home, telling me to get more rest.”

Chest pains overtook Novak twice in spring 2019, while snorkeling and hiking on vacations. Back in Seattle, she underwent tests and wore a heart-rate monitor, which showed an abnormal EKG and high blood pressure, but nothing more specific. “I couldn’t walk a hundred yards without being totally out of breath,” she said.

At Novak’s request, her doctor prescribed a CT scan, which revealed a 90% blockage in the artery that supplied her heart’s left ventricle and septum. A stent – metal scaffolding – was implanted the next day to widen the artery.

“It wasn’t until I went to cardiac rehab that I found out I had more blockages that they didn’t fix” because the vessels were too narrow, Novak said, relating what she was told. Instead, her cardiologist prescribed medication to dilate those vessels. Novak’s fatigue re-emerged, causing her to take several months off from work and to forgo family events.

“There were so many activities I just thought I would never do again,” she said.

So it went till October 2019 when she sought a second opinion outside of her health system. She met with UW Medicine Heart Institute cardiologist James McCabe, who Novak said “was the first person to explain exactly what was going on.” The conversation led to more tests.

“Though her heart-artery angiograms weren’t overtly suggestive, the more functional tests were through the roof, suggesting they [the heart arteries] real problem,” McCabe said. “She had a series of significant heart-artery blockages.”

McCabe said that the artery to the back side of her heart was not, in fact, too narrow to be stented; instead, abundant plaque ringing the inside of artery had made it appear very narrow in the initial angiogram. Novak’s first cardiologist had either misread that or misinterpreted her patient’s options.

McCabe reopened the blocked artery with another stent so that Novak’s heart could get sufficient nutrients and oxygen. Near-complete vessel blockages are unusual for someone as young as Novak, he acknowledged – addressing how a primary-care doc might’ve underestimated the cause of her fatigue.

Novak felt stronger as soon as she sat up in bed in recovery. “I instantly knew that my life had changed,” she said. The next morning she texted McCabe to say she couldn’t remember the last time she had felt so good.

“And the first time I took the garbage out after the procedure, I thought, ‘Wow, that was really easy.’” Novak said later.  By December she was training for a half-marathon.