Zika virus may cause significant damage to the fetal brain even when the baby’s head size is normal. The damage can be difficult to detect even with sophisticated brain scans. 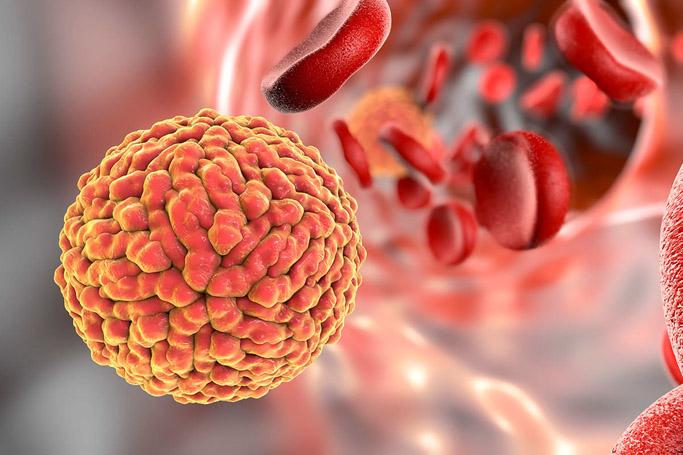 Kateryna Kon/Science Photo Library
An artist"s conception of a Zika virus in the blood stream.

Downloadable video assets  available for use by news media

“Current criteria using head size to diagnose Zika-related brain injury fail to capture more subtle brain damage that can lead to significant learning problems and mental health disorders later in life,” said  Dr. Kristina Adams Waldorf, a professor of obstetrics and gynecology at the UW School of Medicine who specializes in maternal and fetal infections. “We are diagnosing only the tip of the iceberg.”

Damage may also occur in children infected during early childhood and adolescence, the researchers warn.  It's also possible that undetected Zika brain damage may later lead to learning disorders, psychiatric illnesses and dementia.

These findings  appear in the Feb. 5 issue of Nature Medicine. In addition to Adams Waldorf, the lead researchers were Dr. Michael Gale Jr., a professor of immunology at the UW School of Medicine and an expert on how the body responds to viruses, and Dr. Lakshmi Rajagopal, an associate professor of pediatrics at the University of Washington School of Medicine and expert on newborn infectious diseases at Seattle Children’s Research Institute and UW Medicine.

An epidemic of Zika virus infections occurred in Brazil in 2015. Since then, there has been a surge in the number of infants in the Americas born with small heads due to brain damage that occurred when their mothers were infected during their pregnancy.

The virus targets and destroys neural stem cells. These produce new brain cells for normal brain growth and development. Many of these children are diagnosed during pregnancy by ultrasound or at birth because they have markedly small heads, a condition called microcephaly. More recently, medical scientists have recognized that even children with a normal head size at birth may be diagnosed with serious eye injuries or late-onset microcephaly, when the head fails to grow normally after birth.

In the new study, researchers looked for subtle changes in the brains of five fetal macaques whose mothers had been infected with the Zika virus in pregnancy. The animals were chosen because macaques are considered one of the closest animal models to human pregnancy. They are also ideal for the development of vaccines and treatments to protect humans from the virus.

In all but one case, the researchers found no obvious fetal abnormalities with weekly ultrasounds, a medical imaging technique that is commonly used during pregnancy to assess the health of developing fetuses.

The brains of the infected fetuses, however, did grow more slowly than normal, but they remained large enough so that their smaller size did not meet the criteria for Zika virus-associated microcephaly used by the U.S. Centers for Disease Control and Prevention. Under these criteria, most children (between 91 percent to 96 percent) born in the United States whose mothers were infected with Zika during the pregnancy are also not considered microcephalic. As a result, those children might not be checked regularly for Zika-related brain injury.

Magnetic resonance imaging (MRI) scans of the fetal brains, however, were abnormal in 4 of 5 of the animals. Certain areas of the brain were not growing as quickly as others. Brain regions that were particularly hard hit were areas that generate new brain cells. These regions include the subventricular zone in the wall of the lateral ventricle, which contains the largest number of neural stem cells in the brain. Another injured part of the fetal brain was the subgranular zone of the dentate gyrus in the hippocampus, a structure where neural stem cells play a key role in memory and learning and continue to contribute to brain health through at least adolescence.

"The study clearly shows that cells within these brain regions are highly susceptible to Zika virus infection. The findings suggest that neural stem cells within these sites, and at specific stages of development, are unable to suppress virus replication," said Gale.

Because neural stem cells in the hippocampus, which are vulnerable to Zika virus damage, are present during childhood and adolescence, Rajagopal said, we should be concerned that viral infection in children and young adults may significantly affect brain health.

“Subtle damage caused by this virus during fetal development or childhood may not be apparent for years, but may cause neurocognitive delays in learning and increase the risk of developing neurological disorders such as schizophrenia and early dementia,” she added. “These findings further emphasize the urgency for an effective vaccine to prevent Zika virus infections.”

“All children exposed to Zika virus in utero should be followed long-term for problems with learning and development, regardless of head size at birth,” Adams Waldorf said. “And we should also be worried about children and young adults becoming infected with the Zika virus because they have the same vulnerable stem cells in their brains as the fetus.”