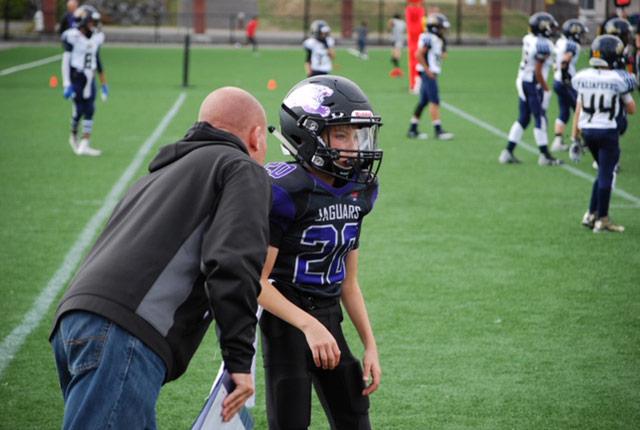 Photo courtesy of the Ronneberg Family
Andrew Ronneberg, 14, gets guidance while playing in the Northwest Junior Football League. He sustained a concussion in 2017.

New research from UW Medicine's Sports Health and Safety Institute and Seattle Children’s Research Institute found concussion rates among football players ages 5 to 14 were higher than previously reported, with five out of every 100 youth, or 5 percent, sustaining a football-related concussion each season.

Published Dec. 13 in The Journal of Pediatrics, the study summarizes key findings from data collected during two 10-week seasons of the Northwest Junior Football League. Licensed athletic trainers from Seattle Children’s treated and recorded concussions at league games, which enabled researchers to characterize the injuries' number and factors that influenced risk.

“Measuring the incidence of concussion in grade-school and middle-school football players is essential to improving the safety of the game. It’s hard to determine the impact of prevention efforts if we don’t know how often these injuries occur at baseline,” said Sara Chrisman, the study's lead author. She is an investigator at the research institute’s Center for Child Health, Behavior and Development and an assistant professor of pediatrics at the University of Washington School of Medicine.

Getting accurate data in a difficult-to-track age group

Prior studies of concussion in youth football have relied on incomplete injury reports from team managers, coaches and other sources, partly explaining researchers' previous estimates of incidence, which are as much as 4 percent lower.

Despite an American Academy of Pediatrics recommendation that athletic trainers provide medical coverage for youth football, the use of athletic trainers is not prevalent in grade-school and middle-school leagues.  Without a medical professional on the sidelines, it's likely that some child players with concussions go undiagnosed, the researchers said.

By contrast, the current study provided licensed athletic trainers for medical surveillance at all league games and practices during the 2016 and 2017 seasons. The trainers helped researchers identify 51 play-related concussions among 863 competitors that were followed for the study (including 133 who participated for two seasons).

“We’re just starting to piece together how factors such as prior injury or depression may contribute to a child’s risk of concussion. Our study revealed patterns about who was most at risk for concussion, and these are areas we hope to explore in future studies,” Chrisman said.

Recreation- and sports-related concussions affect up to 1.9 million U.S. youth each year.  This study is one of several underway at Seattle Children’s to better understand youth concussion and to find better ways to prevent, diagnose and treat it.

“This study lays the groundwork for new efforts to prevent head injuries in youth football,” said Chrisman, who also leads research using pregame safety huddles to promote safe play. “Making sports safer for youth is at the core of our research.”

- Lindsay Kurs, as originally reported by Seattle Children’s On the Pulse​