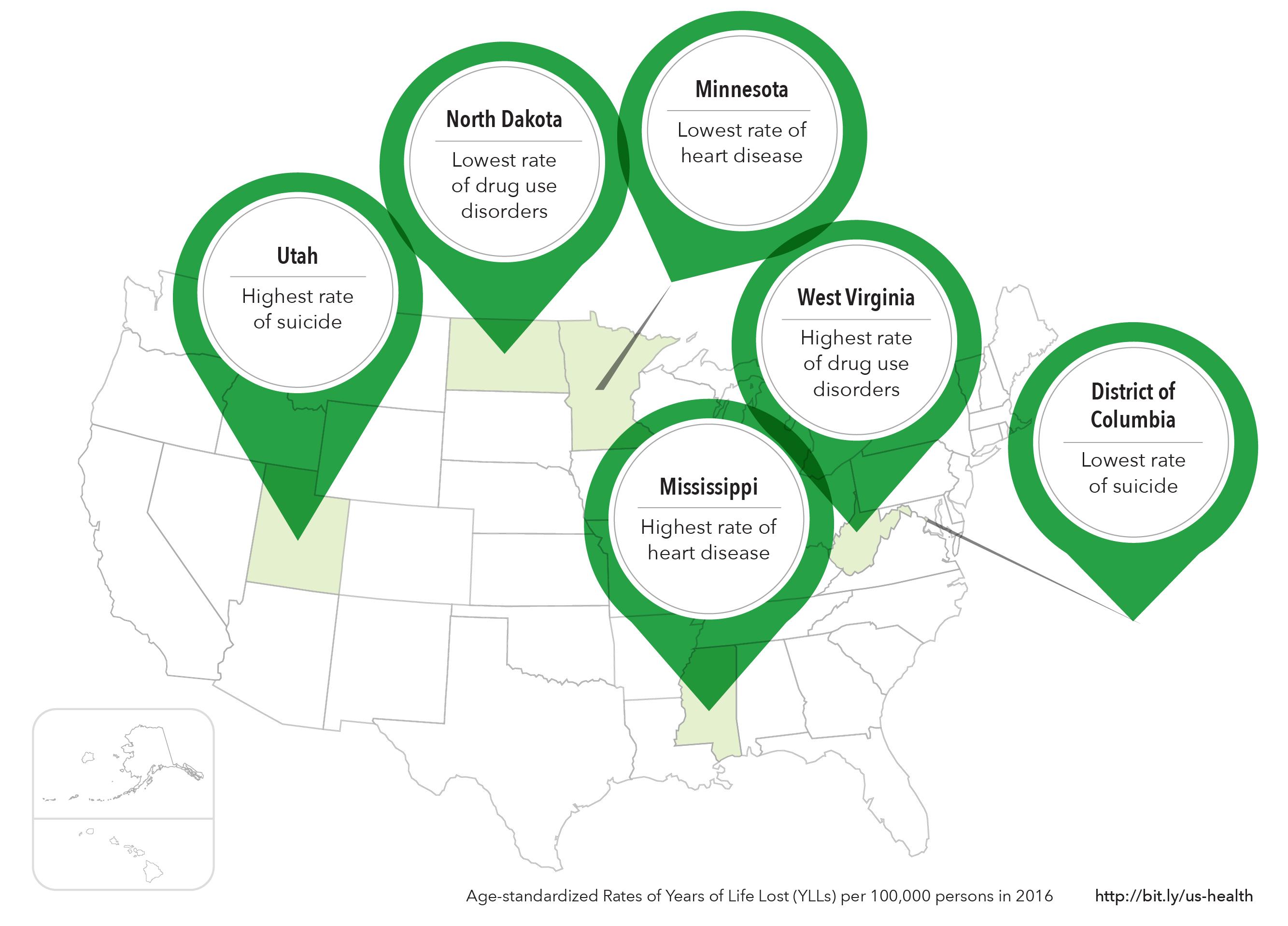 Institute for Health Metrics and Evaluation
Health disparities’ among U.S. states are highlighted in the most comprehensive state-by-state health assessment ever.

Nationally, Washington is seventh in the nation for lowest rates of years of life lost, with lower rates found only in Minnesota, California, Connecticut, Hawaii, New York, and Massachusetts.

Low back pain topped the list of problems causing Washington residents to live with years of disability in 2016, followed by major depression and other musculoskeletal disorders. While diabetes ranked fifth on this list, at 154 percent, it represents the largest increase in nonfatal health loss in the state over the 26-year period.

High body-mass index remained the number one risk factor causing both death and disability in Washington in 2016. Others in the top five are (in order) smoking, high fasting plasma glucose, high systolic blood pressure, and drug use.

Nationally, working-age Americans in 21 states faced a higher probability of premature death from 1990 to 2016. The likelihood of early death for men and women age 20 to 55 is highest in West Virginia, Mississippi, and Alabama. In contrast, same-age residents of Minnesota, California, New York, and several northeastern states have a lower probability of premature mortality.

“We are seeing dangerous disparities among states,” said Dr. Christopher Murray, director of the Institute for Health Metrics and Evaluation (IHME) at the University of Washington, which coordinated the study. “Unless and until leaders of our health care system work together to mitigate risks, such as tobacco, alcohol, and diet, more Americans will die prematurely, and in many cases, unnecessarily.”

The study, published today in JAMA, covers 1990 to 2016; it is part of the Global Burden of Disease (GBD) study, a comprehensive effort to quantify health internationally, covering 333 diseases and injuries and 84 risk factors. It is the most comprehensive state-by-state health assessment ever undertaken and includes estimates of prevalence, incidence, death, life expectancy, and several other summary health metrics for all 50 states, the District of Columbia, and the nation overall..

In 2016, key factors driving the increased likelihood of early death for those aged 20 to 55 included substance abuse, suicide, and alcohol-related conditions. For these diseases, the states with the “worst” and “best” age-standardized rates of years of life lost (YLLs) per 100,000 people were the following (with national rates shown for comparison):

Opioid use disorders rose from the 11th-leading cause of disability-adjusted life years (DALYs) in 1990 to the seventh leading cause in 2016.

“The US has witnessed some improvements among youth under 20 and seniors over 55, but overall the nation and some of our states are falling behind other, less developed countries,” said Dr. Ali Mokdad, who, with Murray, wrote the study. “The strain on America’s health resources is getting worse, and the need for prevention services and greater access to and quality of medical care is increasing.”

In addition, the burden of mental health disorders is increasing in the United States with DALYs; major depression increased over 27 percent nationwide between 1990 and 2016. Similarly, the burden due to anxiety disorders increased by about 31 percent and totaled 1.76 million DALYs in 2016.

Murray also noted that high body mass index (BMI), smoking, and high fasting plasma glucose (FPG) were the three largest health risks in 2016. Both high BMI and FPG are linked to diabetes. In addition, high BMI, commonly referred to as overweight or obesity, is associated with an increased risk of cardiovascular diseases, some types of cancer, and poor health generally.

Among the study’s findings:

NOTE: An in-depth study of cardiovascular disease from this study titled “The Burden of Cardiovascular Diseases Among US States, 1990-2016” will be published April 11 in JAMA Cardiology.