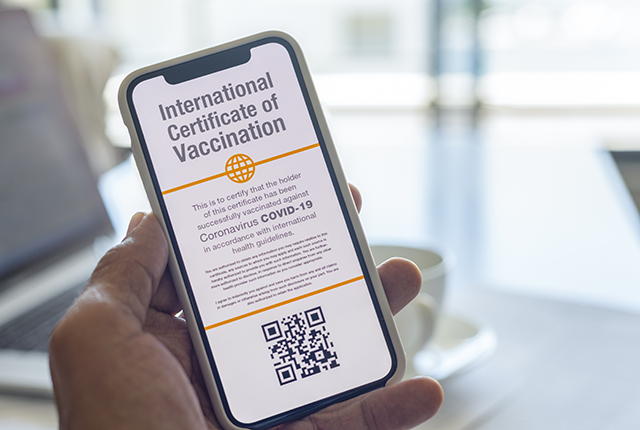 The lack of equitable access to COVID-19 vaccines undercuts the ethical basis for vaccination “passports” to confer eligibility for domestic and international travel, according to an analysis published July 10 in the Journal of Medical Ethics.

In the paper, Nancy Jecker, a bioethicist at the University of Washington School of Medicine, examined arguments supporting vaccine passports’ utility and virtue. While she acknowledged passports’ potential to curtail the pandemic, she also asserted that the documents are unduly restrictive because they do not accommodate people who lack access to vaccines nor people who refuse vaccines based on medical, religious or philosophical grounds.

Jecker proposed instead “flexible passes” that would allow those who test negative to travel and also would afford exceptions to people stating a conscientious objection to a COVID-19 vaccine.

“We’re trying to achieve a balance between competing values and goods. It’s clear that it’s a public good to protect public safety during a global pandemic. The question is, how do we go about it? How do we balance this public good against other values, like being fair to everyone and respecting individual autonomy?” she asked.

The paper argued that passport programs implemented for international travel would only entrench inequities that favor citizens of high- and upper-middle-income nations, whose residents have received 85% of all COVID-19 vaccine jabs to date.

“Most of the world doesn’t have access to vaccines,” Jecker noted. “If we form an exclusive club and say (that) only people with access to vaccines can hop on a plane, who are we leaving out? Whose freedom are we curtailing and whose are we expanding?”

Domestic passports are “more ethically defensible” for nations to consider, Jecker wrote – but only after a country achieves widespread, equitable access to vaccines. These documents ostensibly would be presented for in-country travel as well as for access to restaurants and bars, gyms, and workplaces.

Even domestic vaccine passports, however, would be vulnerable to the biases of whoever is charged with enforcement – as with a bar bouncer who decides which patrons to ask for ID and which to challenge. This could invite racial, ethnic and other profiling that is unfair to certain groups.

For domestic travel, Jecker argues a “flexible pass” is a way to pursue public health without unfairly marginalizing certain groups.

A flexible pass would be granted to anyone who has been vaccinated or has recently tested negative for SARS-CoV-2 or has recovered from a documented COVID-19 infection. This is more inclusive because it does not leave out people who state a conscientious objection to receiving a vaccine or those who lack vaccine access.

“I think that solves the issue of achieving this public good and keeping people safe, but it is fairer and respects vaccine refusers,” Jecker said. “It allows people who test negative to engage in the same activities as people who are vaccinated.”

Regarding vaccine refusers, Jecker acknowledged that it’s impossible to know if someone’s objections are conscientious, “but we use an honor system and allow refusal because it protects people’s autonomy.” She objected to identifying people who don’t get vaccinated as “bad citizens,” saying it oversimplifies the diverse reasons people have for opting out.

A flexible pass program also should be structured to protect pass holders against discriminatory policing and safeguard their privacy, she added. Pass policies should be updated if new scientific evidence comes to light or new ethical concerns arise post-implementation.