Finding may help explain caffeinated coffee’s link to a reduced risk of melanoma. The researchers used an enzyme from plants and marsupials to distinguish the lesion. 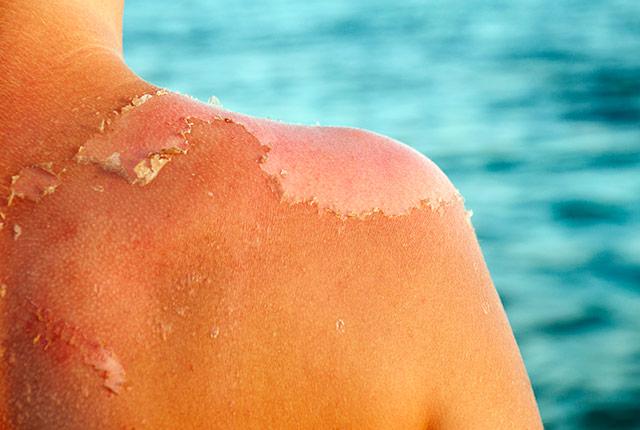 Upon exposure to human skin, ultraviolet light from the sun almost instantly generates two types of "lesions" that damage DNA. It has long been unknown, though, whether one of these lesions is more responsible for activating a process that may increase cancerous mutations in cells.

In a new paper, scientists at UW Medicine in Seattle identify the lesion type responsible for this potential harm: It is called “6-4 photoproducts,” or 6-4PPs for short. The finding is the first to demonstrate that 6-4PPs and its counterpart lesion, cyclobutane pyrimidine dimers (CPDs), differently affect a cell’s response to UV light damage.

The journal PNAS published the paper on May 22.  [This video provides context to the findings.]

“When these lesions are generated on DNA, they stimulate a response called the ATR pathway. It senses DNA damage and regulates the repair and survival of damaged cells,” said lead author Masaoki Kawasumi. He is an assistant professor of dermatology at the University of Washington School of Medicine.

Curiously, Kawasumi said, although the CPD lesions are far more abundant, they do not activate ATR; instead, that crucial reaction is caused by the 6-4PP lesions.

Differentiating each lesion’s effect has never been explained because thousands of each lesion type rapidly arise in every UV-exposed cell.

To overcome this problem, the investigators combined several approaches including photolyases that can selectively repair one type of lesion. Photolyases are DNA-repair enzymes in plants and aplacental mammals such as marsupials but not present in humans.

The authors used a photolyase to generate human cells with only one type of DNA lesion. These cells were then studied individually, using flow cytometry to determine how each lesion influenced ATR activation.

“We found that 6-4PPs are the trigger of UV-induced ATR activation,” Kawasumi said. “And we know that ATR promotes the survival of DNA-damaged cells – which is not desirable because when they survive, they increase mutations in skin.

“We think that targeting ATR-activated cells may eliminate 6-4PP-containing cells that are precancerous, and help suppress skin-cancer development.”

The investigators also hypothesized that this study might help explain previous findings that linked consumption of caffeinated coffee with a lower risk of skin cancer. Caffeine, which is found in coffee and tea, can inhibit ATR, and a previous mouse-model study showed that inhibiting ATR leads to the death of UV-damaged cells and suppresses UV-induced skin cancer development.

Kawasumi called out the work of Kai-Feng Hung, a former Ph.D. student who studied fundamental mechanisms of UV-induced DNA damage. Hung worked in the Kawasumi lab in the UW Division of Dermatology.

Other researchers involved in this study were Julia M. Sidorova and Paul Nghiem.