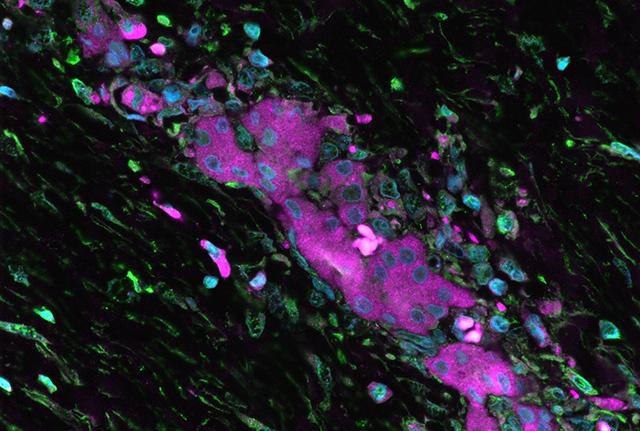 New findings show how a genetically aberrant, fused protein promotes a rare form of liver cancer in adolescents and young adults. The researchers also saw that a certain mix of drugs could target the fused protein and the enzymes that it recruits.  In the lab, this drug combination slowed down the uncontrolled growth of cells carrying the liver cancer mutation.

While the potential treatment approach needs further testing in animal models and in cancerous human liver cells, the early results are encouraging. This preliminary research project was published in eLife.

“There is a great need to improve treatment for patients with this form of liver cancer, called fibrolamellar carcinoma or FLC,” said John D. Scott, professor and chair of pharmacology at the University of Washington, who was the senior author on the paper.

The lead researchers were Rigney E. Turnham, who recently received her Ph.D. in pharmacology from the UW, and F. Donelson Smith, research assistant professor of pharmacology at the UW School of Medicine. The study involved several other scientists, and included a collaboration with Raymond S.W. Yeung, professor of surgery and founder of the Liver Tumor Clinic at UW Medical Center, and Kimberly J. Riehle, associate professor of surgery, Division of Pediatric Surgery and a Seattle Children’s Hospital surgeon.

At present, fibrolamellar carcinoma is difficult to eradicate in patients because the cancer does not respond consistently to treatment, the researchers explained. FLC tumors are often resistant to standard radiation therapy and chemotherapy.  As yet, directed agents have not worked well either.  During early stages, the tumors can usually be surgically removed.  However, the cancer tends to return and spread to other locations.

By examining tumor genomes from the cancer, other scientists in earlier studies detected a mutation on chromosome 19. Liver cells with this mutation produce a chimeric enzyme with two fused components.  Studies by Turnham’s and Smith’s research team revealed that this fused enzyme  also has the unusual ability to recruit a heat shock protein that is commonly overproduced in stressed-out cells.

Obtaining sufficient tumor cell lines to study this rare disorder is difficult. Instead, the research team genetically edited mouse liver cells to mimic the human mutation and produce the chimeric protein. Biochemical analysis of these engineered cells showed that the fused protein rallied a set of enzymes associated with unchecked, accelerated cell proliferation.  The researchers confirmed that the same enzymes are activated in human tumor cells from FLC patients.

The fused proteins insert themselves into anchored signaling complexes, which hold them in place inside the cell. Acting as a secondary scaffold, the fused proteins and their associated assemblies mobilize certain cell signals.  Its organizational skills may be key to the chimeric protein’s cancer-inducing nature.  This scenario may be a case, the researchers think, of normal biochemical functions becoming inappropriately incorporated into molecular pathways that promote disease progression. These misdirected mechanisms appear to be likely targets for a precision pharmacology approach.

The researchers additionally conducted a drug sensitivity screening of anti-cancer compounds that were already FDA-approved.  They tested several combinations of drugs for the ability to act simultaneously on the fusion protein/heat shock protein pair. The researchers found drug combinations that could blunt the proliferation of cells containing the genetically engineered liver cancer mutation. Normal liver cells were unaffected by the treatment.

The researchers believe that the drug combinations that were effective in this lab bench study warrant further investigation as potential therapeutic strategies against FLC.

The researchers also hope their latest findings overall will be valuable in exploring new treatments of this debilitating disease of adolescents and young adults. The team’s studies reflect a strong translational medicine collaboration between basic scientists and clinicians.

This study was supported by grants from the National Institutes of Health (2T32CA080416), National Institute of Diabetes and Digestive and Kidney Diseases (F32DK121415 and FR)1DK119192),  National Cancer Institute (R21CA177402), NIH Office of the Director (S10)D021502), St. Baldrick’s Foundation, and the Fibrolamellar Cancer Foundation.