Synthetic protein packages its own genetic material and evolves

Synthetic protein packages its own genetic material and evolves 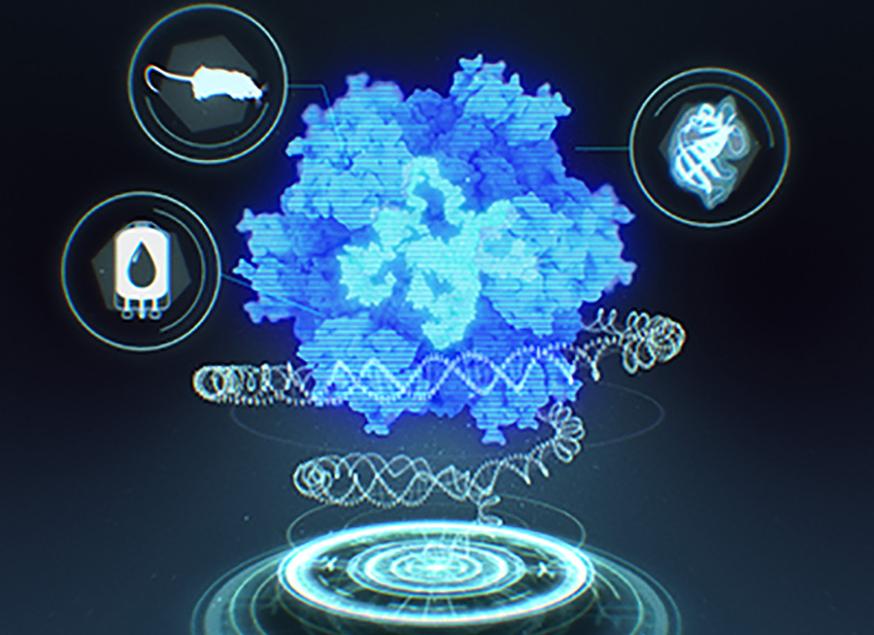 Institute for Protein Design & Cognition Studio
Synthetic nucleocapsids composed of computationally designed proteins that can package their own RNA genomes providing a blank slate to evolve useful properties for drug delivery and other biomedical applications.

Scientists have succeeded in developing the first reported synthetic protein assemblies that encapsulate their own genetic materials and evolve new traits in complex environments.

The project is reported this week in the scientific journal, Nature. The lead authors of the paper are Gabriel L. Butterfield and Marc J. Lajoie at the University of Washington Institute for Protein Design.

The advance stems from molecular engineering projects at UW Medicine and other areas of the University of Washington to create targeted drug delivery systems.  The synthetic protein assemblies were computationally designed. They did not exist previously until they were formed in a lab.

The scientists created these assemblies in their search for new ways to transport therapeutic cargos into specific types of cells without using viruses as vehicles.

“Targeted drug delivery is a major unsolved need in medicine,” Lajoie noted, “Currently, researchers are using viruses, which are effective, but difficult to engineer, or they are using polymeric nanoparticles, which are engineerable, but less effective at targeted delivery.”

In addition to their potential for biomedical applications, the newly designed protein assemblies could be groundbreaking in synthetic life research.  They are believed to be the first fully synthetic assemblies to package their own genetic materials and evolve new traits. These are functions normally associated with living things.

The new protein assemblies are synthetic versions of nucleocapsids – genome containers.  Most viruses surround their genetic material with a protein shell. The synthetic nucleocapsids were built to resemble a virus shell, which, like the hold of an aircraft or ship, can protect and deliver cargo.

Lajoie explained that, unlike living viruses, these synthetic genetic cargo-carriers can’t copy themselves to reproduce. Butterfield added, “Still, they rival viruses in genome packaging efficiency, and are much simpler and easier to engineer.”

Combining computational design with evolution provides a fresh opportunity to develop new biological functions. In this way, the researchers observed, complex properties required for biomedical applications were introduced into these protein assemblies.  These included improvements in their ability to package RNA, enhanced resistance to blood (which has substances that would usually  degrade such assemblies), and a longer circulation time in living mice.

Improvements in each property came from changes to specific regions of the capsid. Initial packaging came from redesigning the interior to electrostatically capture RNA. Following this, evolutionary steps were: evolving the interior to better foster RNA packaging, evolving protection against RNA damaging enzymes and other destroyers in the blood, and evolving the exterior to increase circulation time in living mice.

Packaging genetic material is critical for living things. It preserves the code of life which occurs in chemical form as DNA or RNA molecules.

“We designed synthetic nucleocapsids from scratch based on two completely unrelated proteins,” Lajoie said.  “This is exciting because we were able to design functions that are essential for life without having to use existing cells as a template.”

Future work will carry on the combined design-and-evolve strategy to try to optimize the function of the protein assemblies in complex settings, such as those in live tissues.

“We were surprised at how efficiently evolution solved our problems so far. We hope that this will continue as we pursue our next goals: delivering therapeutic cargos to specific cells in animals,” Butterfield said.