Lab uses protein found in lamprey to turn neurons on and off; discovery may lead to therapies for mood disorders, addiction. 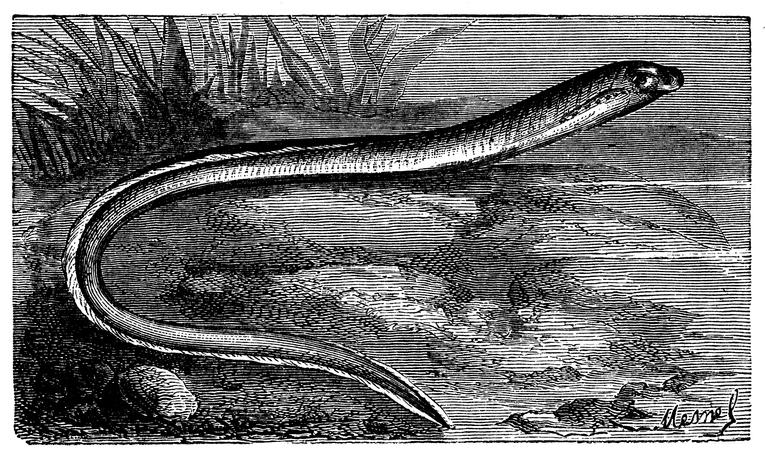 Getty Images
An ancient lineage of jawless fish similar to eel called lamprey was the key to successful experiment published in Neuron.

Researchers looking to help people suffering from addiction, depression, and pain are studying how certain brain neurons operate to see if they can be controlled.

In a paper published May 11 in Neuron, researchers at the University of Washington School of Medicine and Washington University in St. Louis, along with several other universities, successfully used a protein called parapinopsin to turn off brain circuits. This protein is found in lamprey – an ancient lineage of jawless fish similar to eel. Researchers said the ability to inhibit neurons could eventually lead to turning off mood disorders and unwanted behaviors like depression and addiction.

“We found a particular protein that comes from lamprey that has been around for hundreds of millions of years. We took the gene from that protein and found we can control the way neurons talk to each other, which is how chemicals are transmitted into the brain,” said lead corresponding author Michael Bruchas, professor of anesthesiology and pain medicine at the University of Washington School of Medicine and co-director of the Imaging and Neural Circuits core of the Center for Neurobiology of Addiction, Pain, and Emotion.

For decades, neuroscientists have been using different types of light-sensitive proteins that are expressed in plants and bacteria to experiment with brain circuitry, said Bruchas. But this is the first time a protein was taken from lamprey to control brain circuits.

Parapinopsin is a type of protein called a “g protein coupled receptor” or GPCR. These GPCRs emerged early on in evolution and can be found in organisms ranging from bacteria to humans. Bruchas said there at least 850 of these kinds of proteins in mammals. These proteins control everything from heart rate to fat storage, to reward and stress responses. GPCRs also respond well to chemicals, such as dopamine and serotonin, which make people feel good.

“Some of these GPCR pathways are highly conserved across millions of years of evolution, and that allowed us to hack into them using parapinopsin,” said Bryan Copits, lead author and co-corresponding author, assistant professor of anesthesiology in the Pain Center at Washington University School of Medicine, where Bruchas was formerly located. Researchers from University of California (UC), Los Angeles, UC Davis, UC San Diego, and University of Zurich were also involved.

The Bruchas Lab focuses on GPCRs. But finding a way to inhibit neurons had been hard to come by until the parapinopsin discovery, Bruchas said.

The researchers found that the protein in lamprey respond to light not chemicals – another approach for targeted delivery. For example, if a part of the brain was having seizures from Parkinson’s, it might be possible to isolate the effect with an electrode, dampen it with adjustments to neurotransmission, or to inhibit specific pathways to improve mood.

Bruchas said the original discovery of parapinopsin was made by researchers in Japan in the Terakita lab, who have been discovering different light-sensitive GPCRs across species.

“This is a perfect rationale for why basic science is so incredibly important,” said Bruchas. “Because of someone’s hard work of basic biological discovery, we have a new tool for medical research. “

Bruchas said his team is planning to use the discovery for research into expanding their knowledge of the inner workings of the brain and to identify treatments for stress, depression, addiction, and pain.

Study in brief:
Optical approaches to  inhibit neuronal projections rapidly and reversibly have lagged behind those for activation. Copits and others identify a photoswitchable GPCR-based opsin that couples to inhibitory effectors. This opsin leverages the natural ability of presynaptic GPCRs to inhibit transmitter release to provide an alternative strategy to manipulate distinct synaptic projections.