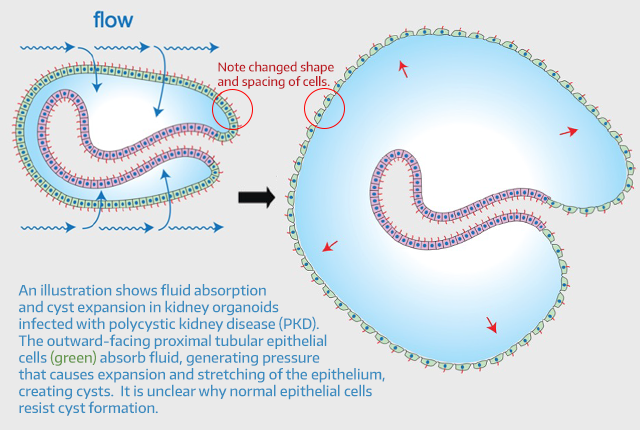 Courtesy of the Benjamin Freedman Lab

A study of kidney organoids in a novel lab environment might have downstream implications for the treatment of polycystic kidney disease (PKD), an incurable condition that affects more than 12 million people worldwide.

One key discovery of the study: Sugar appears to play a role in the formation of fluid-filled cysts that are PKD’s hallmark. In people, these cysts grow big enough to impair kidney function and ultimately cause the organs to fail, necessitating dialysis therapy or transplant.

The findings were published Dec. 23 in Nature Communications. Co-lead authors are Sienna Li and Ramila Gulieva, research scientists in the lab of Benjamin Freedman, a nephrology investigator at the University of Washington School of Medicine.

“Sugar uptake is something that kidneys do all the time,” said Freedman, a co-senior author. “We found that increasing the levels of sugar in the dish cultures caused cysts to swell. And when we employed drugs known to block sugar absorption in the kidneys, it blocked this swelling. But I think it relates less to blood sugar level and more to how kidney cells take in sugar — which in this process seemed to go rogue and give rise to cysts.”

For years Freedman has studied PKD in organoids grown from pluripotent stem cells.  Organoids resemble miniature kidneys: They contain filtering cells connected to tubes, and can respond to infection and therapeutics in ways that parallel the responses of kidneys in people.

Although his team can grow organoids that give rise to PKD cysts, the mechanisms of those cysts’ formation are not yet understood. In this investigation, the researchers focused on how the flow of fluid within the kidney contributes to PKD.

To do so, they invented a new tool that merged a kidney organoid with a microfluidic chip. This allowed a combination of water, sugar, amino acids and other nutrients to flow over organoids that had been gene-edited to mimic PKD.

“We were expecting the PKD cysts in the organoids to get worse under flow because the disease is associated with the physiological flow rates that we were exploring,” Freedman explained. “The surprising part was that the process of cyst-swelling involved absorption: the intake of fluid inward through cells from outside the cyst. That’s the opposite of what is commonly thought, which is that cysts form by pushing fluid outward through cells. It’s a whole new way of thinking about cyst formation.”

In the chips, the researchers observed that the cells lining the walls of the PKD cysts faced outward as they stretched and swelled, such that the tops of the cells were on the outside of the cysts. This inverted arrangement — these cells would be facing inward in living kidneys — suggests that cysts grow by pulling in sugar-rich fluid, not by secreting the liquid.

The observation gives researchers more information about how cysts form in organoids, a finding that will have to be tested further in vivo. As well, the fact that sugar levels drive cyst development points to new potential therapeutic options.

“The results of the experiment are significant because there is a whole class of molecules that block sugar uptake in the kidneys and are attractive therapeutics for a number of conditions,” Freedman said. “They haven’t been tested yet, but we view this as a proof-of-concept that these drugs could potentially help PKD patients.”

Dr. Jonathan Himmelfarb, professor of medicine (nephrology) at the UW School of Medicine, was a co-senior author of the paper.

A competing interests statement can be found in the Nature Communications paper or may be obtained by contacting mediarelations@uw.edu.

Thatcher Heldring contributed to this release.