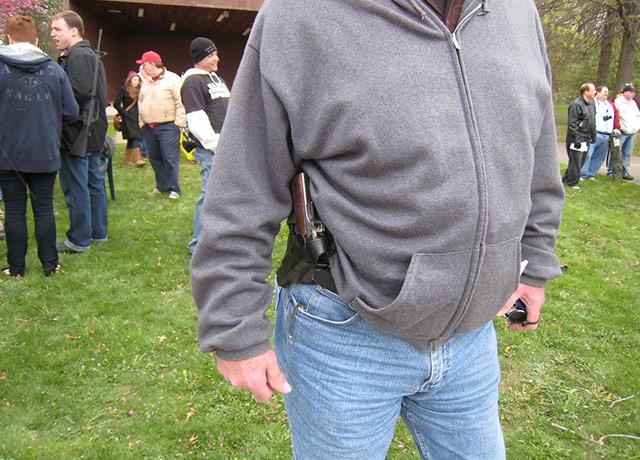 Flickr | Teknorat
A man openly carries a handgun in a holster at a 2010 open-carry protest in Campbell, Ohio.

An estimated 3 million adult American handgun owners carry a firearm loaded and on their person on a daily basis, and 9 million do so on a monthly basis, new research indicates. The vast majority cited protection as their primary reason for carrying a firearm.

It is the first research in more than 20 years to scrutinize why, how often, and in what manner U.S. adults carry loaded handguns. It also examines how concealed handgun-carrying behavior differs across states, depending on their laws.

“Carrying firearms in public places can have significant implications for public health and public safety,” said lead author Dr. Ali Rowhani-Rahbar, an associate professor of epidemiology at the UW School of Public Health. “An important first step to examining the consequences of firearm carrying at the national level is an accurate measurement of the occurrence of this behavior and characterization of those who engage in it.”

Compared with handgun owners who did not carry, those who did report carrying handguns tended to be younger, and more often male, live in the southern United States, have grown up in firearm-owning households, self-identify as politically conservative, and own more than one type of firearm.

“It was important to study handgun carrying because about 90 percent of all firearm homicides and nonfatal firearm crimes for which the type of firearm is known are committed with a handgun,” said Rowhani-Rahbar, who is also an adjunct assistant professor of pediatrics at the UW School of Medicine.

When comparing handgun-carrying behavior with corresponding states’ laws, researchers found that proportionally fewer handgun owners carried a concealed handgun if they lived in a state whose laws afforded greater discretion to issuing agencies in the review of concealed-carry applications. Some owners nevertheless reported carrying a concealed handgun without a permit in states in which doing so was illegal.

In this same time period, the number of U.S. concealed-carry permit holders has increased significantly.

Rowhani-Rahbar said more research is needed to comprehensively evaluate the impact of increasingly permissive firearm-carry laws. Future studies should focus on analyzing how different concealed-carry laws influence carrying, and characterizing illegal carrying behavior among those who have been denied permits.

The study was funded by the Fund for a Safer Future and the Joyce Foundation.