Analysis points up relationship between cognitive decline and RNA, as well as tissue samples resilient to disease 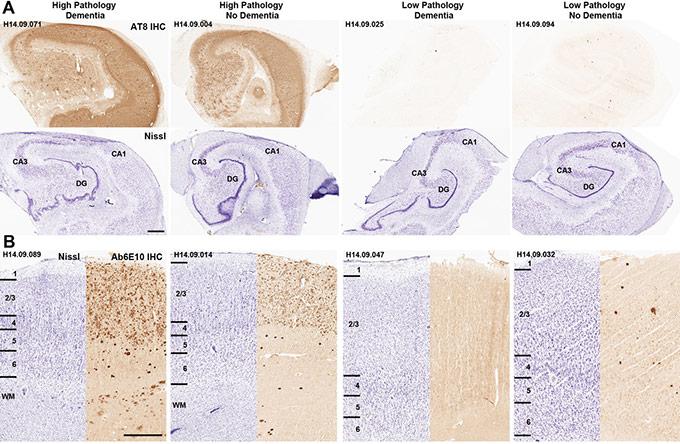 An analysis of tissue samples from 107 human brains has revealed details that will advance medical understanding of the biological bases for Alzheimer’s disease and dementia in older populations. The analysis highlights surprising variability in the aged brain, including examples of donors with resilience to pathology of disease.

The research, jointly conducted by the Allen Institute for Brain Science, UW Medicine and Kaiser Permanente Washington Health Research Institute, is published this month in the journal eLife.

“We anticipate that this dataset and research model will inform and help shape future brain-aging research to propel a deeper understanding of the mechanisms driving neurological disease,” said C. Dirk Keene, a study co-author and director of neuropathology at UW Medicine.

The data underlying the research are publicly available as part of the suite of open data resources at the Allen Brain Atlas portal.

“Since the population of individuals over 90 years of age is rapidly increasing, understanding both healthy aging and age-related disease is essential,” says Ed Lein, an investigator at the Allen Institute. “This means we must discover how cognitive decline correlates with the brain pathologies we typically attribute to diseases like Alzheimer’s in aged brains, as well as the biology underlying individual vulnerability and resilience to disease.”

The researchers sought to understand whether associations previously identified between cognitive status, gene expression and brain pathologies—such as plaques and tangles typically found with Alzheimer’s—held true in a well characterized aged population.

“Several studies exist that compare expression in donor brains aged 60 to 85 years, but few in the more aged cohort we were able to study here,” said Jeremy Miller, a senior scientist at the institute and the paper's lead author. “We found that the more aged brains still showed a correlation between cognitive decline and the Alzheimer’s-associated plaques and tangles, although the relationship was not as strong as in younger cohorts.”

The research also revealed a surprising relationship between dementia and decreased quality of RNA, a key player in gene expression, in the brains studied.

“One factor not always taken into account when studying gene expression in the aged brain is the quality of the genetic material itself,” Miller said. “This variable is not necessarily related to any specific pathology or disease, but these results highlight the importance of properly controlling for RNA quality when studying the aged brain and indicate that degradation of genetic material may be an underappreciated feature of neurodegeneration or dementia.”

The study samples came from the Adult Changes in Thought (ACT) study, a longitudinal research effort led by Kaiser Permanente (formerly Group Health) and the University of Washington School of Medicine to collect data on thousands of aging adults, including detailed information on their health histories and cognitive abilities.

“This collaboration ... has allowed us to gain insights never before possible into the relationships between neuropathology, gene expression, RNA quality, and clinical features tracked in the ACT study over more than 20 years,” said Eric B. Larson of Kaiser Permanente, who has led the study from its start in 1986. “We are grateful to the thousands of volunteer subjects who worked with us and those who donated their brains to science. The results are transformative in improving our understanding of the aging brain.”