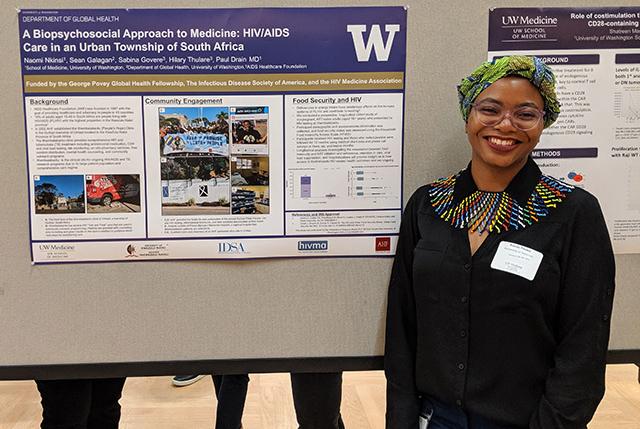 Her parents were from the Democratic Republic of Congo and she grew up with a rich history of African culture. But when she moved to a suburb of Atlanta when she was 6, she changed her name to “Nay-o-me” and ditched the brightly colored clothes for jeans and T-shirts. She struggled to fit in.

Nkinsi, now a medical student at the University of Washington School of Medicine, and public health student at the University of Washington School of Public Health focusing on global health, is one of 30 winners of the Paul & Daisy Soros Fellowship for New Americans. Winners get $90,000 unless graduating sooner. This is a highly competitive fellowship looking for graduate students who are going to make the most significant contributions to society. Of the 2,445 applicants; 77 were chosen for final interviews. And just 1% of applicants receive the award.

Craig Harwood, director of the fellowship, said once they interviewed Nkinsi they knew she was going to be chosen.

“Naomi has so many truly outstanding accomplishments and she blew us away in her interviews,” he said. “She is not afraid to think big or ask tough questions.”

As a medical student, Nkinsi learned about an algorithm for kidney function that gives Black people a different score based on their race. This algorithm makes it harder for Black people to get diagnosed with kidney disease sooner or be eligible for a kidney transplant. Nkinsi said this algorithm was not based on sound science, and when she heard about it in class, she was shocked.

Nkinsi said she was known for being outspoken on race and racism in medical school, so she said she leaned into her drive for racial justice.

Nkinsi was not the first person to challenge this algorithm but it was her voice that changed the medical school curriculum. This led to interviews by NPR, STAT, CNN, Scientific American, and others.

“I can fight for others because I’ve had to fight for myself,” Nkinsi wrote in her fellowship essay.

She wrote that it wasn’t until she was an undergraduate at UW and took part in the Alliances for Learning and Vision for Under-represented Americans pipeline program for minority students that she felt empowered to fully embrace her identity.

“Slowly, the false veneer I had painted on myself to fit in was cracking,” she wrote. “My transformation has taken years of heartache, doubt, and therapy, and is still not complete. In fact, I continue to struggle with how I should blend my identity as an American and as a proud member of the Bayansi tribe of the Democratic Republic of Congo, but through this I have found a voice for advocacy. I have not only reclaimed my name, but my voice as well.”

In her first summer of medical school, she received research grants to work at a field site at the iThembalabantu People’s Hope Clinic in Durban, South Africa. The International Clinical Research Center within the UW Department of Global Health runs a research clinical program there with a large cohort of people living with HIV. Nkinsi met with the clinical team to enroll patients in a study and worked on a research project on whether food security affects HIV outcomes. She is presenting on her data in May.

“She is definitely going to make a big and lasting impact,” said Dr. Paul Drain, an associate professor of global health at the UW schools of Medicine and Public Health, who runs the research program.  “Naomi is constantly challenging herself to learn more about the communities she works with through the lens of cultural humility. She has established and nurtured her own relationships with my partners in South Africa and continues to make community empowerment the focus of her work.”

Nkinsi began conducting independent research in a genomics lab at the UW School of Medicine the summer immediately after graduating from high school run by Dr. Michael Bamshad, a professor of pediatrics and adjunct professor in medical genetics and genome sciences. She continued with this work throughout all four years of her undergraduate training in both public health and molecular biology. Her work has earned her numerous awards including first place oral presentations at two national biomedical research conferences, a first place award at the National Human Genome Research Institute Annual Meeting, recognition as a Washington Research Foundation Distinguished Undergraduate Scholar, and a scholarship from the Department of Biology at UW.

Nkinsi wants to work with children in a health system that works on the totality of a child, including community infrastructure, education, access to healthy nutritious foods, and support for all the caregivers in that child’s life. She points to the Country Doctor Clinic in Seattle and the Panzi Clinic in the Democratic Republic of Congo, run by Nobel Prize winner Denis Mukwege, as examples.

Winning the fellowship, Nkinsi said, was not only very exciting, but it was “very validating” for her efforts to improve health equity.

The fellowship was founded by Paul and Daisy Soros who emigrated to the United States from Hungary after living under communism and Nazism. Despite having very little when they arrived, Paul Soros pursued graduate school in engineering and went on to become a successful engineer and entrepreneur. In the late 1990s they decided to fund a fellowship to honor the contributions of immigrants to the United States.