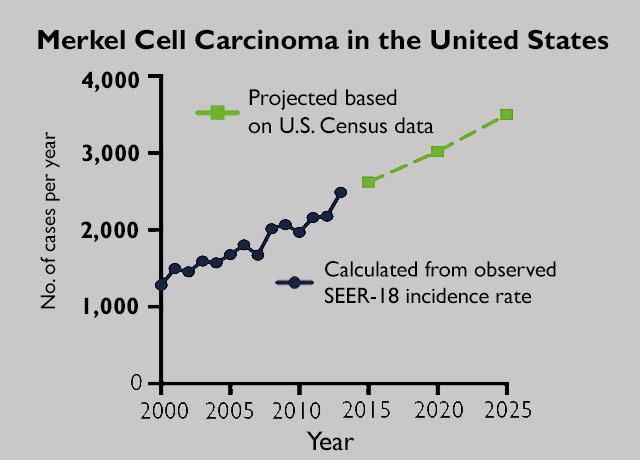 The number of U.S. cases of Merkel cell carcinoma, an often-fatal skin cancer, is rising about six times faster than most other cancers and at nearly twice the rate of the more-common melanoma.

The Journal of the American Academy of Dermatology's March issue reports the finding, which is based on research conducted at the University of Washington School of Medicine. The finding also will be presented tomorrow at the academy’s annual meeting by Paul Nghiem, a professor and chair of dermatology at the school, and Kelly Paulson, a UW senior fellow in hematology and oncology.

About 2,500 people are diagnosed with Merkel cell cancer every year in the United States currently. Incidence is projected to surpass 3,200 by 2025, data suggests. This reflects “the baby boomer generation, which is aging into the stage of life in which the cancer’s risk rises steeply,” said Paulson, the paper’s lead author.

“This is important because Merkel cancer is two to three times more likely to recur and to be fatal than melanoma,” she said, “and physicians’ awareness and education on Merkel cancer and how to manage has been very limited.”

Because melanoma incidence has increased in recent decades, the researchers suspected that Merkel cell cancer incidence was increasing, too. After examining data from the National Cancer Institute’s SEER-18 registry, they found that it was rising even more than they had anticipated.

Merkel cells exist in the epidermis, the outer layer of skin, and at highest density on the fingertips and lips/face. They communicate touch-related information such as pressure and texture to the brain and may have additional functions not yet understood. Merkel cell carcinoma was so named because the tumor cells resemble Merkel cells.

For a long time, the disease was almost unheard of. Ten years ago cases began to accumulate, however it was estimated at just 1,500 to 1,800 cases a year in the United States.  Merkel cancer experts now think incidence was actually higher but that some cases were misdiagnosed.

“At that time, we had no effective treatments for this rare cancer if it spread and knew little about its pathophysiology,” Paulson said. “But in the past decade, the virus that causes Merkel cell cancer was discovered, and we recognized the immune system’s critical importance in controlling it.”

Nghiem, the paper’s corresponding author, and Paulson are also investigators at the Fred Hutchinson Cancer Research Center.  Nghiem is one of the world’s foremost experts on Merkel cell cancer; his research has identified genetic mutations that may pose vulnerability to the disease, and a blood test to discern which Merkel cancer patients are more susceptible to recurrence.

“We know several … of the tricks that [Merkel cell cancer] has used to evade the immune system,” he said, among them, ones that can be addressed with therapies available today.

Immunotherapies have demonstrated efficacy in Merkel cell cancer in clinical trials. Nghiem, Paulson and Shailender Bhatia, a UW professor in hematology and oncology, are currently conducting a trial to discern whether immunotherapy can prevent disease recurrence for the patients who have completed surgery and/or radiation for Merkel cancer that has spread to nearby lymph nodes.

Disconcertingly, many people have no visible skin lesion when they are diagnosed with this cancer, Nghiem said.

"We think that some people will have a Merkel cell carcinoma arise on the skin, have it spread to their lymph nodes and, around the same time, the primary lesion will go away," he said. Researchers think the Merkel cell virus can be dormant in the body for a period of years and then emerge fully when the person's immune system is weakened – in some cases due to advancing age.

In any case, Paulson added, it's important for primary-care providers, dermatologists and medical oncologists to know that these cases will be increasing, and to be looking for red or purple lesions, especially among baby-boomer patients.

The research included funding from the National Institutes of Health (T32-CA009515, K24-CA139052, R01CA176841); from the Prostate Cancer Foundation (award #15CHAS04); the UW Merkel Cell Carcinoma Patient Gift Fund; and the Bloom Endowment at University of Washington.