Scientists use time travel to trace how cancer evolves

Scientists use time travel to trace how cancer evolves

Process reveals clues about DNA mutations: Which tended to be initiators, and which followed? 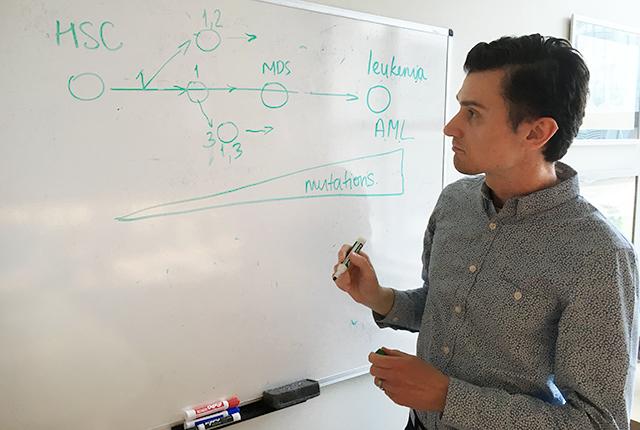 It’s possible to take precancerous cells back in time, so to speak, revealing individual DNA mutations in their earliest state and the likely sequence in which those mutations were acquired, according to scientists in Seattle.

The discovery could shed light on the natural rules that govern how cancers evolve through progressive acquisition of DNA mutations, said lead investigator Sergei Doulatov, an assistant professor of medicine (hematology) at the University of Washington School of Medicine.

The paper was published in print today with an accompanying commentary in the hematology journal Blood.

“When a blood draw or biopsy detects a precancerous condition, that is the first recognition that something’s wrong,” Doulatov said. “But if we think of cancer as genetically driven process that evolves over time, the molecular-level DNA mutations that caused the diagnosis very likely began years earlier. We wondered: Can we go back in history and figure out how a particular tumor evolved?”

This proof-of-concept study comprised precancerous cells from five patients. By interrogating cells of many more patients with the same precancerous condition, Doulatov said, scientists could identify the initiators – mutations that tend to emerge early. This could enable drug makers to focus on disabling or repairing those DNA changes.

The study samples came from patients diagnosed with myelodysplastic syndrome (MDS), a condition in which blood cells in the bone marrow do not fully develop. MDS, a precancerous condition and frequent precursor of leukemia, was selected for testing because most cases involve only two or three destructive mutations, whereas fully developed leukemia involves many more.

Doulatov and colleagues focused on stem cells, which maintain tissues and organs throughout the body.

“From this patient’s bone marrow, which is a mixture of their mutations, we took cells and reprogrammed them to revert back to their embryonic state. As induced pluripotent stem cells, they had only their original DNA information and the mutation that was first present.

“We can then direct pluripotent stem cells to establish distinct lines of hematopoietic stem cells, each with the patient’s distinct DNA and unique mutations. From this we can discern which mutation came first and which were secondary,” he said, adding that the technical process should yield similarly instructive information about any cancer.

“We’ve established that we can go back and examine the natural history in any tumor, and then be able to recapitulate the tumor-development events in a dish. We can explore, for instance, why does mutation No. 1 need these cooperating events? Can we target mutation No. 1 for therapy?”

Doulatov likened the science to that of the Hubble telescope, which is sensitive enough to see stars older than human eyes can perceive.

“Astronomers call this lookback time, and that’s what we’re dealing with here. We want to push our lookback time all the way to the “big bang” event that sets off an unfortunate chain of mutations that result in someone having cancer.”