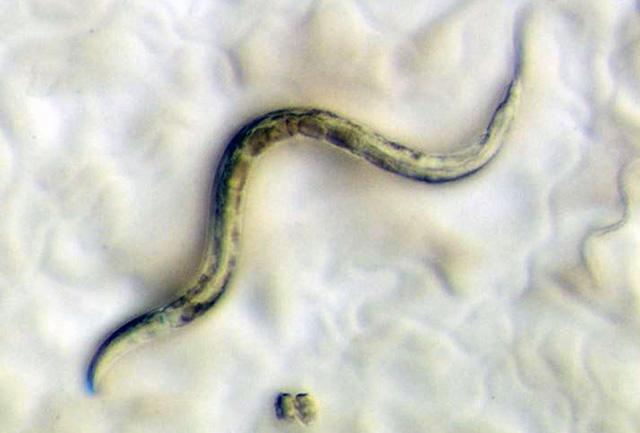 Scientists in aging research today report a novel experimental approach that slowed the rate of physical decline and lengthened the lives of roundworms commonly used in biological studies, C. elegans.

Their findings are described in the Dec. 30 edition of Nature Aging, a scientific journal in the Springer Nature group.

The lead author is Brandon J. Berry, a postdoctoral fellow in the laboratory of Matt Kaeberlein, professor of laboratory medicine and pathology at the University of Washington School of Medicine.

The senior and corresponding authors are Shahaf Peleg of the Group on Epigenetics, Metabolism and Longevity at the Institute for Farm Animal Biology in Dummerstorf Germany, and Andrew P. Wojtovich of the University of Rochester Medical Center in New York.

Their team is interested in discovering ways to directly control the function of mitochondria as part of their work on longevity. Mitochondria are the powerhouses inside living cells. They play a central role in cellular respiration and energy production, among their many critical functions.

Time takes a toll on mitochondria. Also with time, difficulty moving and other signs of growing older start to appear in worms, people, and other animals.

Roundworms are commonly used in aging studies because they have an average lifetime of only two to three weeks. This means research results can generally be obtained quickly.

The scientists on this latest study wanted to learn more about the role of mitochondrial disfunction on roundworm aging, and whether some of this deterioration could be stalled or reversed.

Mitochondria are encased in a double membrane. The inside layer is pleated like an accordion. In previous modeling studies by others, the voltage potential (the capacity to move charged particles) across the inner membrane was observed to wane with age.

Why this happens is an important question in aging research. The mitochondrial membrane potential drives many of the vital tasks of these cell organelles, including energy molecule production, immune signaling, and genetic regulation.

As the researchers point out in their paper, “Decreased mitochondrial membrane potential is an attractive explanation for the complex dysfunctions of aging. However, it is unclear if lessening of the mitochondria voltage potential is a cause or a consequence of cellular aging.”

To try to meet the elusive goal of testing causality, the researchers used a technique called optogenetics, which channels light to precisely control a biological process inside a cell. They were able to specifically boost the mitochondrial membrane potential in the adult roundworms’ cells through a light-activated proton pump. They called this tool “mitochondria-ON.”

Roundworms have transparent bodies, and all their cells are visible under a microscope, characteristics that also lend themselves to this approach.

The juvenile worm populations prepared for this study were kept without light during their development until Day 1 of their adulthood. Then they were exposed to the experimental conditions.

By rejuvenating the roundworms’ mitochondrial membrane potential with the optogenetics technique, the scientists reversed some of the age-associated signs of aging in their three different strains and reproducibly extended the lifespan of the treated worms, compared to untreated worms.

In the roundworms, the researchers noted, “We were able to show that harnessing the energy of light to experimentally increase mitochondrial membrane during adulthood is alone sufficient to slow the rate of aging.”

Roundworms, like people, tend to have more trouble moving as they age. Despite their growing older, the mitochondria-ON activation improved the thrashing rate of worms placed in liquid.

Those results, the scientists noted, appear to suggest that age-related physiologic decline in the roundworms might be improved by directly reversing the loss of mitochondrial voltage potential that occurs with the passage of time.

The authors declared a competing interest (patent application) based on some of this work.

Journalists: If you are not able to open the Nature Aging article online please contact mediarelations@uw.edu or press@nature.com for a copy.