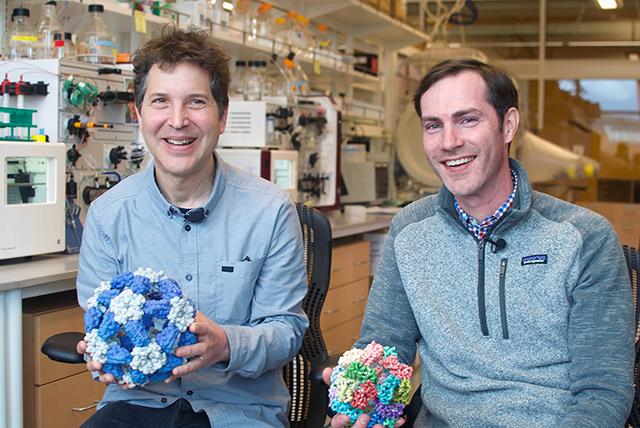 The Institute for Protein Design at the University of Washington School of Medicine in Seattle has received a commitment of an initial $45 million in funding through The Audacious Project, a philanthropic collaborative that surfaces and funds critical projects with the potential to create massive global change.

“This is simply wonderful, and it comes at the best possible time,” said David Baker. He is the the institute’s director, a UW School of Medicine professor of biochemistry, and a Howard Hughes Medical Institute investigator. He also holds the Henrietta and Aubrey Davis Endowed Professorship in Biochemistry.

“As we get better and better at designing proteins to perform specific tasks,” said Baker, “it has become possible to have bold new approaches to solving some of the most vexing problems in medicine today.”

The institute will use The Audacious Project funds to pursue the computational design of:

Please see the Institute for Protein Design fact sheet for more information on the institute and its innovation hub of projects.

The institute will expand its team of engineers and scientists who will work together to advance their best-in-class Rosetta protein design software.  It will also add three new tenure-track professors, five acting instructors, and will support additional postdoctoral fellows, graduate students, and staff scientists from around the world. The funding will also support investments in equipment, supplies, and laboratory space needed to design, build, and characterize millions of synthetic proteins.

Support leveraged via The Audacious Project was made possible through the generosity of Laura and John Arnold, Steve and Genevieve Jurvetson, Chris Larsen and Lyna Lam, Lyda Hill Philanthropies, Miguel McKelvey, the Clara Wu and Joe Tsai Foundation, Rosamund Zander and Hansjörg Wyss for the Wyss Foundation, and several anonymous donors. The UW School of Medicine hopes these funds will spur more contributions to the Institute for Protein Design.

Baker said the goal of the initiative is to create the Bell Labs of protein design, referring to the enormous productivity and invention of Bell Telephone Laboratories. There, scientists and engineers invented such technologies as the transistor and the laser, as well as information theory, which underpins the digital age. “We hope to attract some of the best and brightest from around the world to work on what we think is going to be a protein design revolution,” Baker said.

“We believe that protein-based technologies will play an increasingly transformative role in this space,” said Neil King, an assistant professor of biochemistry at the UW School of Medicine, who leads the institute’s vaccine design efforts. “The Audacious Project will help us realize that vision in a way that simply wouldn’t be possible through traditional grant-based funding.”

“We created The Audacious Project to give lift-off to some of the world’s most transformative projects — the ones with the potential to revolutionize entire fields,” said Anna Verghese, executive director of The Audacious Project. “The Institute for Protein Design has been a long-standing pioneer in computational protein design. Now, with a solid blueprint in place and support through The Audacious Project, the Institute for Protein Design will venture to accelerate the pace of discovery, disseminate new protein technology, and fundamentally change how drugs, vaccines, fuels, and new materials are made.”

About the Audacious Project

The Audacious Project was launched in April 2018, with a mission to foster "collaborative philanthropy for bold ideas." Housed at TED (the nonprofit devoted to ideas worth spreading) and operated with support from The Bridgespan Group (a leading social impact advisor to nonprofits and NGOs, philanthropists and investors), The Audacious Project brings together some of the most respected organizations and individuals in philanthropy—the Skoll Foundation, Virgin Unite, Dalio Foundation and more. The Audacious Project surfaces and funds critical projects with the potential to create global change. By removing barriers associated with funding, The Audacious Project empowers social entrepreneurs to dream boldly and take on the world’s biggest and most urgent challenges.

The 2019 projects include: Center for Policing Equity, Educate Girls, Institute for Protein Design at the UW School of Medicine, Salk Institute for Biological Studies, the END Fund, The Nature Conservancy, Thorn and Waterford UPSTART. Learn more or support an existing project at AudaciousProject.org.

Proteins perform the vast array of functions in life. At the Institute for Protein Design, established in 2012 in the Department of Biochemistry at the University of Washington School of Medicine in Seattle, researchers use computers to design entirely new proteins from scratch. These custom proteins not only mimic many of the functions of naturally occurring proteins, but they also can perform entirely new functions that natural proteins cannot.

“For many years, when protein researchers wanted to solve a problem, they looked to nature for a molecule that did something close to what they wanted, then they would try to make small changes to it,” said David Baker, director of the Institute for Protein Design at the University of Washington School of Medicine. “It’s similar to how our Stone Age ancestors developed their technology: If you wanted to dig a hole, you went looking for a bone that was roughly the right shape, and you sharpened it a bit."

Baker added, “What we do at the Institute for Protein Design is, first, determine what shape a protein would need to do a certain task — say, to serve as an enzyme — and then, using the Rosetta computer software developed at the institute, identify the amino acid sequence that will give us a protein that can do that task,” Baker said. The approach allows researchers to move beyond the limitations of proteins that were created by evolution over millions of years of trial and error.

In recent years, researchers at the institute have developed a mini-protein that can neutralize the flu virus, an enzyme that degrades gluten in the stomach and which is now in clinical trials as a potential treatment for celiac disease, and a first-of-its-kind nanoparticle vaccine candidate for respiratory syncytial virus, oro RSV, which is second only to malaria as a cause of infant mortality worldwide. To date, eight spinout companies have been launched to further develop  several of the institute's engineered, novel proteins for clinical and commercial use.