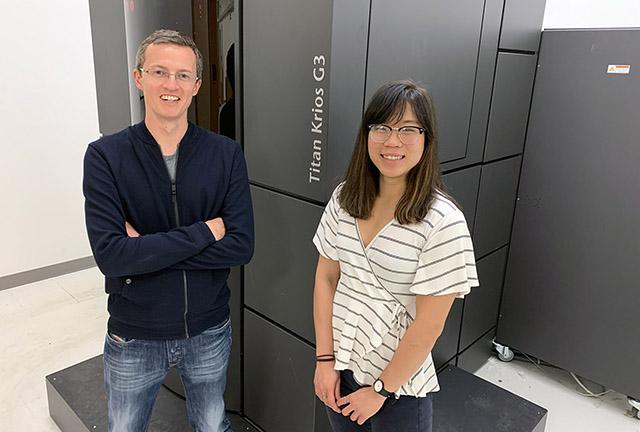 A new monoclonal antibody has been shown to impede the fusion machinery henipaviruses use to merge with the membrane of cells they are attempting to breach. The antibody halts the attack by blocking membrane fusion and the injection of the viral genome into the host cell.

The researchers said they hope that these types of laboratory discoveries will pave the way toward preventing Nipah virus and Hendra virus infections or provide a solution for post-exposure therapy.

At present, there are no vaccines or licensed treatments for these diseases in people. Some patients have been given experimental therapies under compassionate-use exceptions. Veterinary medicine approaches, and farming and wildlife health measures, have also been instituted to control the spread of the viruses in animals and people.

These difficult-to-manage infections emerged as animal-to-human transmitted diseases in the mid- 1990s. Outbreaks have since occurred in Australia, Malaysia, the Philippines, Singapore, Bangladesh, and Kerala and West Bengal, India.

Although no related human diseases have been reported in Africa, henipavirus antibodies have been found there in both people and bats, an indication that the virus is circulating in this continent. This suggests the possibility of henipavirus disease outbreaks arising there in the future

Both Nipah and Hendra can cause severe respiratory illness and brain inflammation. Fatality rates during outbreaks have ranged from 50 percent to 100 percent.

"More than two billion people live in regions threatened by henipavirus outbreaks," the researchers noted in their paper. Their report is published in the Sept. 30 issue of Nature Structural & Molecular Biology.

The anti-fusion monoclonal antibody studies were headed by senior researchers David Veesler of the University of Washington School of Medicine's Department of Biochemistry in Seattle, and Christopher Broder of the Uniformed Services University's Department of Microbiology and Immunology in Bethesda, Maryland.

Ha V. Dang of the UW and Yee-Peng Chan of USU were the lead authors. Also contributing were scientists from the Sealy Center for Vaccine Development at the University of Texas, Galveston.

Among the chief carriers of Nipah virus and Hendra virus are large, fruit-eating bats, called flying foxes. In Australia, horses have come down with Hendra virus after bats contaminated their food or water. Owners, trainers and veterinarians caught the virus while caring for the sick horses.

Nipah virus has been transmitted from bats to pigs in Malaysia and Singapore, and then from the pigs to farmers. People have also been infected with the virus from drinking palm sap that had attracted thirsty bats in Bangladesh and parts of India. Food-borne Nipah virus illnesses now occur seasonally almost every year in Bangladesh.

Nipah virus and Hendra virus are RNA viruses in the family of paramyxoviruses, making them distant cousins of human pathogens such as measles, mumps, respiratory syncytial, and Newcastle viruses.

Many paramyxoviruses have spikey envelopes. The spikes sport a viral-attachment glycoprotein and a fusion glycoprotein. Unlike many other paramyxoviruses, henipaviruses can infect a variety of mammals. These viruses are different and dangerous.

The researchers explained that Nipah and Hendra viruses enter animal or human cells through the concerted action of the attachment and fusion glycoproteins.

After the virus lands on the cell surface, the attachment protein undergoes a shape change that prompts the fusion protein to insert a fusion peptide into the cell membrane.

Afterward, the fusion protein refolds into a more stable conformation that staples together the viral and cellular membranes. A tunnel-like pore is forged for the virus' genetic material to slip into the cell interior to initiate infection.

The body's own humoral immune defenses, mediated by antibody molecules, target vital parts of the merging machinery to keep the virus at bay. In fact, the measles vaccine, the researchers said, creates antibodies that protect against a similar type of viral breach.

Other researchers have discovered antibodies that block attachment of Nipah and Hendra viruses to host cells. One of these antibodies protected animals, even when administered several days after infection.

In this latest study, scientists isolated from mice, and then humanized, a potent monoclonal antibody that neutralizes both Nipah and Hendra viruses. They then studied its mode of action using molecular imaging via cryo-electron microscopy and biochemical and cellular experiments.

These studies revealed that the antibody recognizes and binds to a specific area of the viral membrane fusion machinery during the pre-fusion stage.

This epitope (an antibody target site on the virus) is present in both the Nipah and the Hendra viruses. This explains why the same antibody protects against both viruses. Binding of the antibody prevented membrane fusion and thereby kept the viral material out of the cell.

Facilities for the study reported Sept. 30 included the Arnold and Mabel Beckman cyroEM Center and Proteomics Resource at the University of Washington, and the Advanced Light Source at Lawrence Berkeley National Laboratory.

The research was supported by grants from the National Institute of Allergy and Infectious Diseases (HHSN272201700059C, AI054715, AI077995, AI142764), the National Institute of General Medical Sciences (GM120553), an Investigators in the Pathogenesis of Infectious Diseases Award from the Burroughs Wellcome Fund, a Pew Biomedical Scholars Award, The Netherlands Organization for Scientific Research, and the European Molecular Biology Organization.