Biological structure researchers induce support cells in the retina to become neurons, an approach that someday could help restore vision. 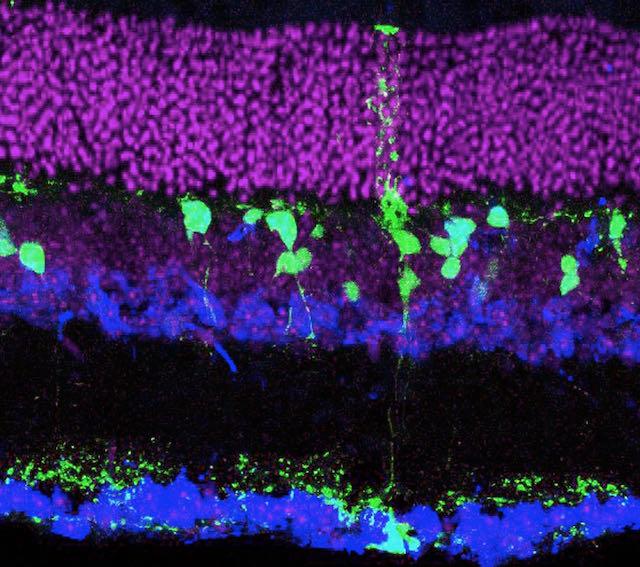 In an approach could someday be used to help repair the retinas in patients who have lost vision due to such diseases as macular degeneration, glaucoma and diabetes, scientists at the University of Washington School of Medicine in Seattle have induced non-neuronal cells to become retinal neurons.

“We see this research as opening up the possibility of gene therapies for diseases where retinal neurons are lost,” said Tom Reh, professor of biological structure at the UW School of Medicine who led the research team

The paper describing the methods and findings appears in today’s issue of Cell Reports. Levi Todd, a postdoctoral researcher in the Reh Lab, is the paper’s lead author.

In the study, the researchers sought to induce cells in the retina, called glial cells, to produce neurons. For many years, the primary job of glial cells in the retina and the brain was thought to be to simply to hold neurons in place. The name, glia, means “glue” in Greek. Glial cells are now known to be highly active cells that play a crucial role in the nurture and support of neurons.

In some species, such as fish and newts, glial cells can repair damaged retina and brain tissue by differentiating into a wide variety of neurons. Glial cells in birds also have a limited ability to repair neural tissue. However, in mammals, such as rats, mice and humans, glial cells can no longer differentiate into other cell types once they have matured. For that reason, the human brain and retina, which is an extension of the brain, cannot repair themselves.

In previous research Reh and his colleagues found that it was possible to induce mammalian glial cells to take a step back in development and become a more immature, primitive cell type called a progenitor cell. Cells in that state have the flexibility to go forward along a number of developmental pathways and differentiate into a variety of cell types.

In a study published in 2017, Reh and his coworkers showed that one transcription factor called Achaete-Scute Family BHLH Transcription Factor 1, or Ascl1 for short, could induce mouse retinal glial cells to become progenitor cells. These cells, in turn, could then differentiate into retinal neurons.

While showing that it was possible to induce glial cells to generate neuronal cells was a breakthrough, the method was inefficient. The approach induced only about 30% of the glial cells to become neurons and generated only a limited number of the different types of retinal neurons. these were primarily a type of interneuron called the bipolar cell through which retinal cells communicate with each other.

In the new study, however, the team found by adding just one other transcription factor, called Atonal BHLH Transcription Factor, or Atoh, it was possible prompt the progenitor cells to start down the development pathway that leads to neuronal cells.

As they report in their new paper, by using Ascl1 in combination with versions of Atoh called Atoh1 or Atoh7, the scientists found it was possible not only to convert more of the glial cells in neuronal cells and but to generate a wider variety of retinal cell types as well.  In addition to the interneurons generated with Ascl1, the addition of Atoh1/7 now enabled the glia to regenerate ganglion cells, which are lost in an eye disease called glaucoma.  The scientists were also able to regenerate a small number of light-sensing cone cells that are responsible fo color vision and are needed for seeing fine detail.

“Basically, we give the cells two nudges,” Reh said. “With the first nudge the glial cells to take a step back to become like progenitor cells. With the next nudge drive these progenitor-like cells move forward down the path to neuronal cells.”

He added, “Remarkably, the new cells organize themselves and connect to each other as they are supposed to—not as well as the original cells, but they appear to be doing the right thing.They also don’t fully mature into adult cells. But we’re hoping that by exposing them to other chemical signals they’ll mature even further.”

The findings suggest that it might be possible to use gene therapy techniques to insert the genetic instructions for these and perhaps other transcription factors into a damaged retina and induce the retina to repair itself. Gene therapy has already been approved for the treatment of an inherited cause of vision loss called RPE65 mutation-associated retinal dystrophy.

“Developing genetic therapies for more common retinal diseases is still a ways off, but these results show a path forward for this approach to restoring vision,” Reh said

This project was funded by the National Eye Institute (NIE R01EY021482), the Gilbert Vision Restoration Initiative (600499). and the Washington Research Foundation.