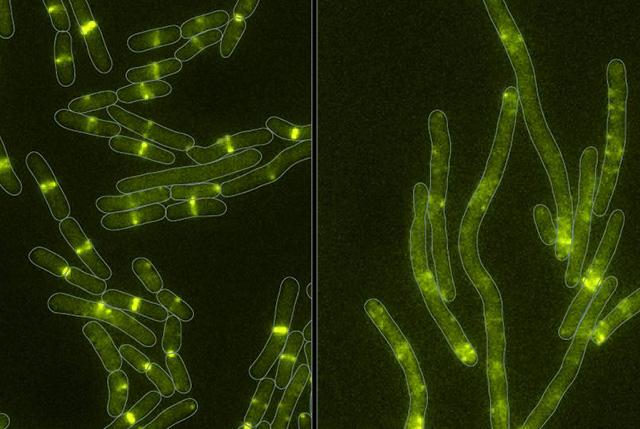 Mougous Lab
Healthy bacteria (left) and bacteria (right) whose cell-division machinery has been disrupted by a toxin newly discovered in some bacterial arsenals.

A newly discovered toxin that some bacteria deploy to fend off competing bacteria stands out from others in the battle for microbial domination.  While many deadly substances have been identified among bacteria, this previously unknown toxin behaves in a familiar way.

“What is special about this toxin,” noted UW Medicine microbiologist Brook Peterson,  “is that it acts by the same biochemical mechanism as some infamous toxins employed by human pathogens, which evolved much later than the toxins bacteria use against each other.”

These include the diphtheria, pertussis and cholera toxins.  These toxins use similar biochemical mechanisms to impair vital proteins inside host cells   For example, the profuse diarrhea that occurs in cholera is a direct result of how its toxin forces cells in the gut to expel too much water and salt by interfering with internal signals. Although bacteria don’t get diarrhea, a look under the microscope shows that they do get visibly sick while they are succumbing to the recently identified toxin, named Tre1.

Peterson is a research scientist in the laboratory of Joseph Mougous, professor of microbiology and biochemistry at the University of Washington School of Medicine in Seattle.

For this work on bacterial skirmishes, they studied Serratia proteamaculans.  Some strains of this ubiquitous bacteria promote plant growth or live inside tree roots.  Some strains inhabit the digestive tract of insects and other animals, and others spoil meat or seafood.

Peterson was one of the senior researchers on the project team that uncovered the new toxin and outlined how bacteria deploy this weapon.

The group also found out how some of the bacteria were protected from poisoning themselves.  The findings are published today in the journal Cell.

Far from being a calm collection of one-cell organisms, bacterial struggle with each other for life-sustaining resources, and avail themselves of a variety of powerful antagonists.  One survival method is to reduce overcrowding in their microbial colonies.

“The toxin we have discovered targets a protein, called FtsZ, that is essential for cells to divide,” Peterson explained.  When this protein is blocked, the intoxicated cells grow longer and longer, she said, and eventually split open.

How do some of the bacterial save themselves from their own deadly intentions?   The researchers observed that they have an unusual safeguard.  These bacteria produce a protein that acts as an enzyme to reverse, almost like an antidote, the modifications that the toxin had instigated.

“This protein protects the bacterium from both the toxin it produces itself,” Peterson noted, “and from toxins that function by the same mechanism but made by other species.”

“Our findings,” the team wrote in the Cell paper, “reveal how an interbacterial arms race has produced a unique solution for safeguarding the integrity of the bacterial cell division machinery…”  This protective mechanism confers broad immunity to a variety of toxins.

This inside look at the chemical warfare and biodefense strategies among bacteria in their own communities also provides new insights into the infections that trouble multicellular organisms, including people.

Interbacterial fighting might also be responsible for encouraging the formation of new, more effective toxins and thereby contribute to the emergence of bacterial diseases.

“Research such as this can offer clues to the evolutionary origins of the potent toxins that bacterial pathogens use to cause disease,” Peterson observed. “It also provides a fascinating example of the complex strategies bacteria employ in their constant battle for survival with their microbial neighbors.” The hostile encounters between bacterial, and their ancestral antibacterial toxins, predate the appearance on the Earth of more complex life forms

The title of the Cell paper reporting this research is, “Bifunctional immunity proteins protect bacteria against FtsZ-targeting ADP-ribosylating toxins.” The lead author of the paper is See-Yeun Ting, of the UW School of Medicine Department of Microbiology.   Researchers from the departments of pathology, physics, and bioengineering also contributed to the work.

The work was supported by National Institute of Health grants to the Northwestern Proteomics Core Facility and to the University of Washington Proteomics Resource.   Parts of the study took place at the Advanced Light Source, a Department of Energy User Facility at Lawrence Berkeley National Laboratory.  Mougous is a Howard Hughes Medical Institute Investigator.