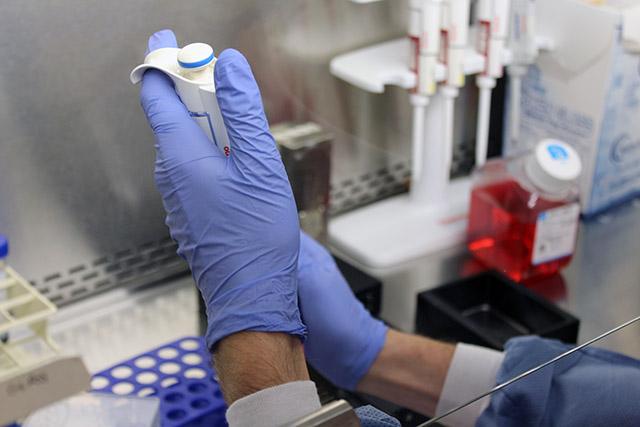 Thatcher Heldring
One of the labs in the new muscle research center. In this lab, run by David Mack, scientists are working on stem cell and gene therapies for neuromuscular diseases.

A new, interdisciplinary muscle research center is celebrating its opening at its main location at UW Medicine South Lake Union.

With collaborating labs across the University of Washington campus and at other Seattle-area institutions and beyond, the Center for Translational Muscle Research will encompass a myriad of muscle science and disease investigations.  Studies will range from the basics of muscle-related proteins, genes and cell biology to the design of potential treatments for devastating muscle diseases.  At present, only symptom management and supportive care is available for many of these conditions.

The latest advances in such areas as gene therapy and stem cell biology are putting medical science closer to finding options for people with as-yet incurable muscle conditions that cause disability and shorten lives. A few of these disorders eventually result in neuromuscular breathing weakness or failure requiring mechanical ventilation.   Some approaches to these types of muscle diseases have entered experimental clinical trials, providing encouragement that these will be fruitful and other promising clinical applications will follow.

“What the new muscle research center offers patients with these diseases, many of whom are racing against time, is hope, “said center director Michael Regnier, professor of bioengineering, a jointly operated department of the University of Washington College of Engineering and the UW School of Medicine.

The range of disorders under investigation will expand to include work on a wide spectrum of skeletal and cardiac muscle diseases.

“The center will study the muscle system and muscle pathologies at all scales, from the atomic and molecular level where the disease begins to the tissue level, where patients are most impacted,” Regnier said.

The center will have facilities and expertise in three core areas:  mechanics and devices, metabolism (life-sustaining chemical reactions, such as energy production) and quantitative analysis.

Time is of the essence for many patients eagerly awaiting treatment progress in muscle diseases that are characterized by a decline and weakening.

“The Center for Translational Muscle Research will accelerate everything we do.  Having access to these core services will be a game-changer for researchers. We’ll see integrated data flowing at full speed between the cores. It clears the path forward for all of us,” said David Mack, professor of rehabilitation. Scientific developments in gene therapy by Mack and other center reserachers are some of those  projects currently moving from the lab into patient testing.

Among the disciplines represented at the new center, in addition to bioengineering, are anesthesiology and pain medicine, mitochondrial science, biology, biochemistry, neurology, pathology, rehabilitation medicine and computer science and engineering.  Scientists at Fred Hutchinson Cancer Research Center, Seattle Children’s Research Institute, the Argonne National Laboratory, and the Allen Institute will also be collaborators.

Clinical partners include pediatric experts in rare genetic disorders and physical medicine physicians who care for patients with neuromuscular disorders at the UW Medical Center Rehabilitation Medicine Clinic and other settings.  Patients will be able to contribute to both scientific and medical studies at the center by donating cells and tissue biopsies, and through participation in clinical trials of new therapies as they become available.

One of several areas in which the center is expected to take a major leadership role is in growing human stem cells, some of which will be derived from patient cells, to produce disease-in-a-lab-dish models.  These models will improve understanding of how the disease pathology begins and develops, and will also serve for testing possible treatments.