A laboratory breakthrough in cell targeting may improve the safety of cancer-killing CAR T cells. 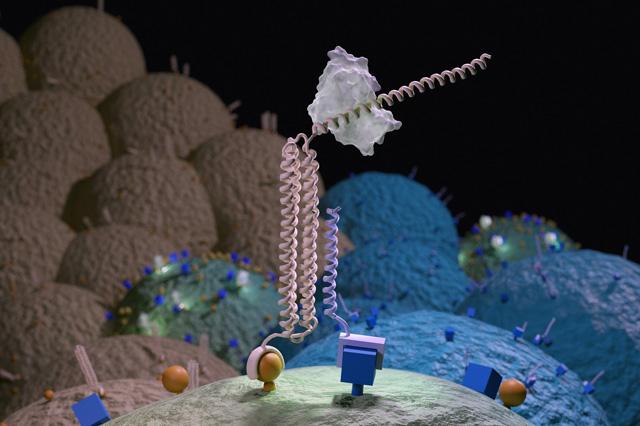 Institute for Protein Design
An artiist's depiction of a Co-LOCKR nano-device coming together on the surface of a cell that has the right combination of cell surface markers.

Scientists have demonstrated a new way to precisely target cells by distinguishing them from neighboring cells that look quite similar.

Even cells that become cancerous may differ from their healthy neighbors in only a few subtle ways. A central challenge in the treatment of cancer and many other diseases is being able to spot the right cells while sparing all others.

In a paper published 20 August in Science First Release a team of researchers at the University of Washington School of Medicine and the Fred Hutchinson Cancer Research Center in Seattle describe the design of new nanoscale devices made of synthetic proteins. These target a therapeutic agent only to cells with specific, predetermined combinations of cell surface markers.

Remarkably, these 'molecular computers' operate all on their own and can search out the cells that they were programmed to find.

"We were trying to solve a key problem in medicine, which is how to target specific cells in a complex environment," said Marc Lajoie, a lead author of the study and recent postdoctoral scholar at the UW Medicine Institute for Protein Design. "Unfortunately, most cells lack a single surface marker that is unique to just them. So, to improve cell targeting, we created a way to direct almost any biological function to any cell by going after combinations of cell surface markers."

The tool they created is called Co-LOCKR, or Colocalization-dependant Latching Orthogonal Cage/Key pRoteins. It consists of multiple synthetic proteins that, when separated, do nothing. But when the pieces come together on the surface of a targeted cell, they change shape, thereby activating a sort of molecular beacon.

The presence of these beacons on a cell surface can guide a predetermined biological activity -- like cell killing -- to a specific, targeted cell.

The researchers demonstrated that Co-LOCKR can focus the cell-killing activity of CAR T cells. In the lab, they mixed Co-LOCKR proteins, CAR T cells, and a soup of potential target cells. Some of these had just one marker, others had two or three. Only the cells with the predetermined marker combination were killed by the T cells. If a cell also had a predetermined "healthy marker," then that cell was spared.

"T cells are extremely efficient killers, so the fact that we can limit their activity on cells with the wrong combination of antigens yet still rapidly eliminate cells with the correct combination is game-changing," said Alexander Salter, another lead author of the study and an M.D./Ph.D. student in the medical scientist program at the UW School of Medicine. He is training in Stanley Riddell's lab at the Fred Hutchinson Cancer Research Center.

This cell-targeting strategy relies entirely on proteins. This approach sets it apart from most other methods that rely on engineered cells and operate on slower timescales.

"We believe Co-LOCKR will be useful in many areas where precise cell targeting is needed, including immunotherapy and gene therapy," said David Baker, professor of biochemistry at the UW School of Medicine and director of the Institute for Protein Design.

The research was conducted at the Institute for Protein Design, the Immunotherapy Integrated Research Center at the Fred Hutchinson Cancer Research Center, and the UW Department of Bioengineering.

This news release was written by Ian Haydon of the Institute for Protein Design.