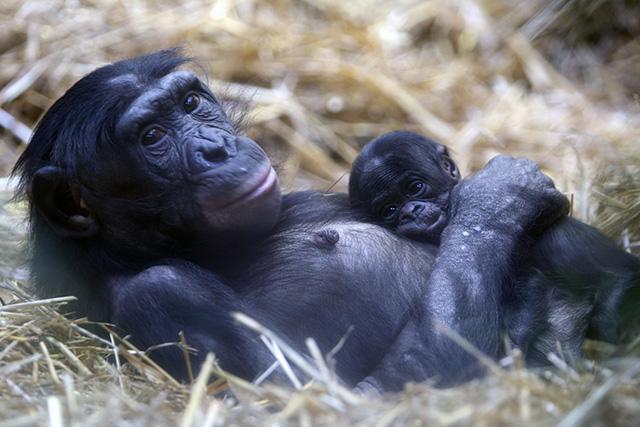 Chimpanzees and bonobos diverged comparatively recently in great ape evolutionary history. They split into different species about 1.7 million years ago. Some of the distinctions between chimpanzee (Pan troglodytes) and bonobo (Pan paniscus) lineages have been made clearer by a recent achievement in hominid genomics.

A new bonobo genome assembly has been constructed with a multiplatform approach and without relying on reference genomes. According to the researchers on this project, more than 98% of the genes are now completely annotated and 99% of the gaps are closed.

The high quality of this assembly is allowing scientists to more accurately compare the bonobo genome to that of other great apes – the gorilla, orangutan, chimpanzee – as well as to the modern human. All these species, as well as extinct, ancient, human-like beings, are referred to as hominids.

In a May 5 Nature paper, researchers explain how they developed and analyzed the new bonobo assembly, and what juxtaposing it to other great ape genomes is revealing.

In comparing the bonobo genome to that of other great apes, the researchers found more than 5,571 structural variants that distinguished the bonobo and chimpanzee lineages.

The researchers explained in the paper, “We focused on genes that have been lost, changed in structure, or expanded in the last few million years of bonobo evolution.”

The great ape genome comparisons are also enabling researchers to gain new insights on what happened to the various ape genomes during and after the divergence or splitting apart into different species from a common ancestor.

They were particularly interested in what is called incomplete lineage sorting. This is the less-than-perfect passing along of alleles into the separating populations as species diverge, as well as the loss of alleles or their genetic drift. Analyses of incomplete lineage sorting can help clarify gene evolution and the genetic relationships among present-day hominids.

“We predict a greater fraction of the human genome is genetically closer to chimpanzees and bonobos compared to previous studies,” the researchers note.

Surprisingly, more than a quarter of these regions are distributed non-randomly, have elevated rates of amino acid replacement, and are enriched for particular genes with related functions such as immunity. This suggests that incomplete lineage sorting might work to increase diversity for specific regions.

The new bonobo genome assembly is named for the female whose DNA was sequenced, Mhudiblu, a current resident of the Wuppertal Zoo in Germany. The researchers estimate that sequence accuracy of the new assembly is about 99.97% to 99.99%, and closes about 99.5% of the 108,390 gaps in the previous bonobo assembly.

The bonobo is one of the last great ape genomes to be sequenced with more advanced long-read genome sequence technologies, the researchers noted.

“Its sequence will facilitate more systematic comparisons between human, chimpanzee, gorilla and orangutan without the limitations of technological differences in sequencing and assembly of the original reference,” according to the researchers.

Read a feature in DW about Mhudiblu (whose DNA was sequenced for the new genome assembly) and how she accepted a bonobo named Bili, who had been aggressively bullied by another group of apes, into her group.