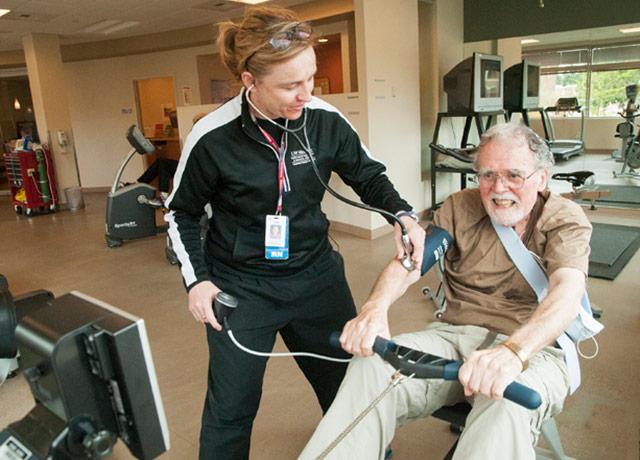 Among more than 230,000 cardiac patients who had sustained a heart attack or undergone one of two common heart procedures, only 16 percent participated in a formal exercise program after their hospitalization – despite the program’s demonstrated benefits to health.

The finding is published today in the print journal Circulation. Lead investigator Alexis Beatty, a cardiologist at the VA Puget Sound Health Care System and an assistant professor of cardiology at the University of Washington School of Medicine, characterized the finding as disappointing.

“We really haven’t seen any improvement since the last time this issue was examined, about 10 years ago,” Beatty said. “Some areas are doing relatively better, like the central-north United States, and we’d attribute that mainly to cardiologists promoting it more and health systems having a cardiac rehab service in place.

“Patients who don’t get the rehab may have difficulty accessing it easily, especially rural patients, and others may be less motivated. It’s really inexplicable to me why participation rates are so low,” she said. “People who get cardiac rehab are usually glad they did.”

The researchers reviewed rehab enrollment in 2007-2011 among some 143,000 Medicare and 88,000 Veterans Affairs patients who had been hospitalized for myocardial infarction, coronary-artery bypass surgery, or a catheter-based procedure to clear a blockage in a heart vessel.

Cardiac rehab typically comprises thrice-weekly, hour-long sessions of exercise and risk modification for 12 weeks. Evidence of benefit is strong, Beatty said: Participants have better life quality, fewer re-hospitalizations, and less chance of dying of a heart condition than patients with similar medical histories who do not participate, research has shown. Most insurance providers, including Medicare Part B and the VA, cover cardiac rehab for the conditions noted above.

Cardiac rehab participation rates varied widely across U.S. states, ranging from 3 percent to 41 percent among Medicare patients and 1 percent to 47 percent among VA patients. Regional variation, however, was remarkably similar across both groups. With a map of nine regions, researchers found that patients in the West North Central (Iowa, Kansas, Minnesota, Missouri, Nebraska, and the Dakotas) region participated most. Those in the Pacific region (Alaska, California, Hawaii, Oregon, and Washington) participated least.

“It’s weird that the VA and Medicare maps are pretty similar,” Beatty said. “It suggests, if anything, that it’s more regional practice patterns are the main influencers” on whether patients participate. “Some cardiologists do a better job at getting their patients to attend cardiac rehab.”

Rates of referral for cardiac rehab vary, sometimes widely, among hospitals. Beatty pointed to recent studies that showed a range of eligible patients referred, from 48 percent to 91 percent, depending on the medical indication and the patients’ region. This inconsistency spurred the “Million Hearts” initiative, established in 2012 by the U.S. Department of Health and Human Services and the Centers for Medicare & Medicaid Services.

It is an ongoing concerted campaign to draw practitioners’ attention to the value of cardiac rehab. This finding suggests there is more work to do, Beatty said.