Findings may explain how Staphylococcus aureus bacterium can colonize our noses but not cause infection. 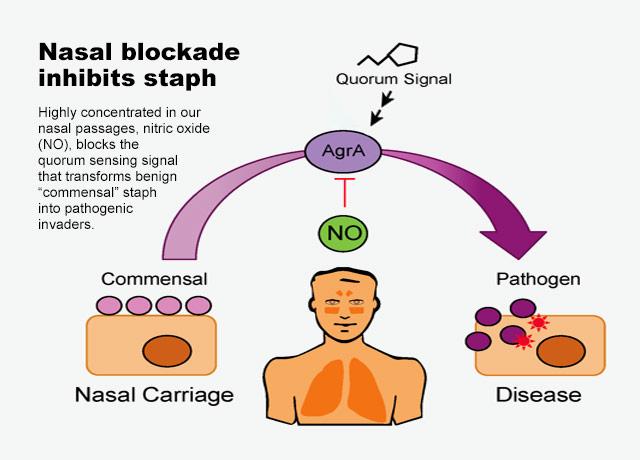 According to the U.S. Centers for Disease Control and Prevention, about one in three humans carries Staphylococcus aureus, or “staph,” in our noses, and 2 percent of us carry the dreaded methicillin-resistant (MRSA) strain that thwarts common antibiotics.

So how is it that most of us never get sick from staph infections?  Researchers at the University of Washington School of Medicine have found a clue.

In a study published April 26 in Cell Host & Microbe, the researchers show that an immune-system generated molecule called nitric oxide (NO) inhibits the ability of the S. aureus to transform from a relatively benign, quiescent colonizing state to its virulent form, producing toxins to invade and cause disease. This might explain why our nasal passages typically have very high concentrations of NO.

The lead author of the paper is Rodolfo Urbano, a postdoctoral fellow at Yale University.  He conducted the research as a doctoral student in the lab of Dr. Ferric Fang, UW professor of laboratory medicine, microbiology, medicine and pathobiology. He is the paper’s senior author.

“At a time when antibiotic resistance is on the rise, immune molecules that target virulence factors could be used to develop new therapeutics,” Urbano said. The UW team collaborated with peers at the University of Pennsylvania and the University of Colorado.

Urbano said our immune system uses NO as a weapon against many microbes including viruses, parasites, bacteria and fungi.  As with most antibiotics, NO fights most bacteria by limiting their ability to grow. But S. aureus is able to grow despite the presence of NO.

To find out how NO might be keeping S. aureus in check, the researchers set out to identify all the proteins in S. aureus that were modified by NO. Many proteins were altered, they found, but one protein in particular caught researchers’ interest. That protein, called AgrA, plays a key role in the process that switches quiescent S. aureus bacteria into virulent invaders.

This process is called quorum sensing; it's triggered when bacteria reach a certain density—a “quorum”— and initiates the process in which the bacteria begin to produce virulent factors such as toxins.  By modifying AgrA, NO blocked this quorum-sensing system, Urbano and colleagues found.

To confirm their hypothesis, the researchers showed that mice with staphylococcal pneumonia that lacked the gene needed to generate NO developed more severe disease. This demonstrted that NO can suppress the production of toxins during an infection, Urbano said. “The same effect may also apply when there is no ongoing infection,” he said.

“One could speculate that the arrangement is actually advantageous to the bacterium,” Fang said. “The bacterium doesn’t want to make its host sick. It prefers to just colonize the host, grow, and spread to other people. If the staph colonizing me makes me sick and I die, that doesn’t help the staph.”

Fang said his team hopes to better understand how NO protects the body, but also why it fails.

“We know that one of the most dangerous things that can happen to you when you get the flu is that you can develop a staph infection. We would like to know whether the flu disrupts the normal balance between staph and the host and whether it has something to do with NO.”