Fischer shared the 1992 Nobel Prize in Physiology or Medicine with UW School of Medicine colleague Edwin Krebs for discovering a fundamental biological switch in cells. 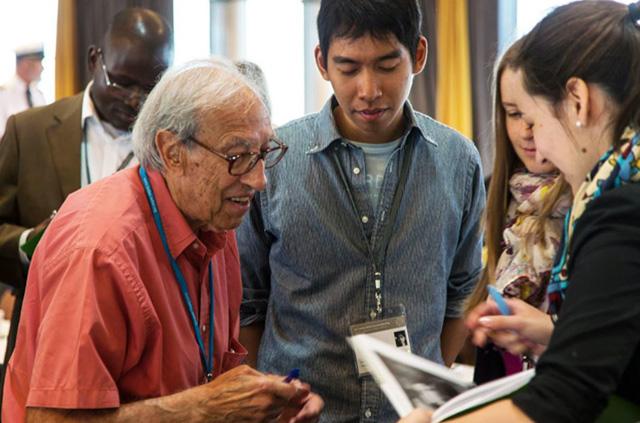 Nobel Prize Laureate Dr. Edmond H. Fischer, a longtime faculty member in biochemistry at the University of Washington School of Medicine, died peacefully in Seattle Aug. 27, 2021. He was 101.

Fischer shared the 1992 Nobel Prize in Physiology or Medicine with UW medical school faculty colleague Edwin G. Krebs, who died in 2006 at 91.

They were honored for describing how reversible phosphorylation of proteins acts as a switch to regulate a variety of biochemical processes in cells.

Fischer was born in 1920 in the Shanghai International Settlement in China. His mother, Renee Tapernoux, was from France and grew up in Switzerland and his father, attorney Oscar Fischer, was from Austria. His maternal grandfather established a French newspaper and school in Shanghai.

At age 7, Fischer and his two older brothers were sent to boarding school in Switzerland. In high school he and a friend declared their interest in making a major contribution to medical science.

When his parents asked him what he wanted for his sixteenth birthday, he knew. As a young boy, he had discovered the life and work of Louis Pasteur, an early pioneer in microbiology and vaccination, and became enthralled. He wanted a microscope.

“I expected to receive a kid microscope,” he later revealed. Instead, on the advice of his parents, his brother, who was then a college student in Switzerland, purchased for him a professional-grade light microscope with three oil-immersion lenses and a moving stage.

Armed with this microscope and a desire to help people like his father, who had tuberculosis, Fischer would go on to study microbiology at the University of Geneva. While an undergraduate there, he and a friend converted a rented attic of a nearby house into their own research laboratory at a cost of sixteen Swiss francs, or four dollars, per month. This unusual commitment to research was noticed by faculty who soon offered both young men formal positions — one as a medical trainee, the other as a scientist.

Over time, his interest shifted away from microbes and toward the chemistry of life. In 1947, Fischer published his doctoral thesis on the isolation of amylase, a key starch-degrading enzyme from the human pancreas.

While seeking a place to conduct postdoctoral research in the early 1950s, Fischer was offered a position at the UW School of Medicine. He was drawn to Seattle in part because its surrounding mountains and lakes reminded him of Switzerland. Fischer would remain at the UW for the rest of his career.

Months into his first position at the UW, Fischer began working alongside the biochemist Edwin Krebs. Both men had conducted research on similar proteins — one from muscle tissue, the other from potatoes. In the case of the muscle protein, an additional chemical was needed for the enzyme to function. In the case of the potato protein, however, no extra chemical was needed. The two men found this discrepancy odd.

They came to discover that many proteins, including glycogen phosphorylase from muscle, are controlled by a chemical transformation known as reversible phosphorylation. The discovery was initially published in the early 1950s. Its significance to biology and medicine unfolded over the years. The insight into this biochemical regulatory switch continues to illuminate fundamental biology and advance medical research in cancer, diabetes and many other fields to this day.

“This was really serendipity,” Fischer told the Nobel Prize foundation in 2000. “You know where you start in research, and you never know where you will end up.”

In describing Krebs' and Fischer's discovery, Dr. William Catterall, former chair of pharmacology at UW Medicine, said in 2001: "The widespread importance of this work cannot be overemphasized. There is no more important discovery in cell biology in our time."

Throughout his decades as a UW professor Fischer mentored scores of graduate students and postdoctoral scholars. He was also recognized with numerous awards, honorary degrees, and memberships to renowned research academies from around the world. He was elected a fellow in the National Academy of Arts and Sciences, a member of the National Academy of Sciences and a Foreign Member of the Royal Society. He was the honorary president of the World Cultural Council from 2007 until 2014.

Fischer was a talented pianist who had considered a career as a classical musician before choosing science.

He also enjoyed flying and for a while held a private pilot’s license.

“I will remember Eddy both as a scientist and as a warm, wonderful colleague,” said Trisha Davis, professor and chair of the UW Department of Biochemistry. “Although he formally retired in 1990, the Fischer lab remained active for several more years, and Eddy never lost touch with the department. Right up until the pandemic, he attended research seminars and dropped in on faculty lunches where he never told the same story twice. He was a great man. We will miss him very much.”

Fischer was married in 1948 to Nelly Gagnaux, and in 1963 to Beverly Bullock, both now deceased.

Fischer is survived by his eldest son François (Frank), his youngest son Henri and his stepdaughter from his second marriage, Paula Dandliker. The Fischer grandchildren are Élyse, Léandre (Leo), Ian and Edmond (Eddie).

Services will be private.  A celebration of Fischer's life will be planned for this autumn.

Below is a Lindau Nobel Laureate Video Portrait of Fischer:

Also, here is a CHIMIA interview with Fischer in 2009.

And obituaries in Washington Post by Matt Schudel and The Scientist by Lisa Winter. .