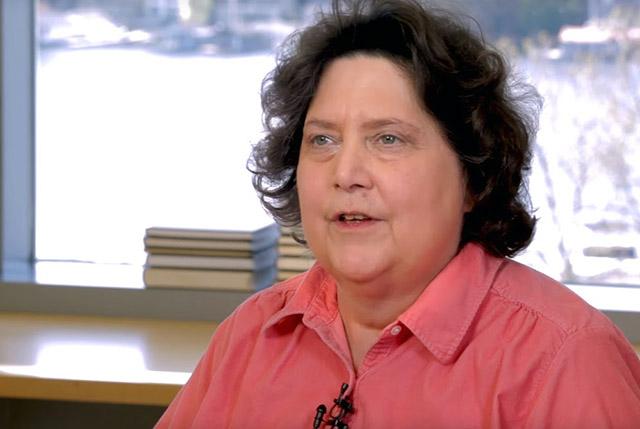 UW Medicine
Dr. Deborah Nickerson during a video interview in 2016 after she was named one of America's most influential scientists by Thomson Reuters.

Dr. Deborah Ann Nickerson, a pioneer in human genomics and one of the most frequently cited scientists of the past decade, died Dec. 24, 2021. She was 67 years old. The cause of death was aggressive abdominal cancer, diagnosed less than a week before her death.

"For more than two decades, Debbie Nickerson has been a true leader in the application of genomic sequencing to precision medicine,” wrote Dr. Francis Collins, former director of the National Institutes of Health. “Always pushing the existing boundaries with an infectious mix of creativity, vision, impatience, and a wicked sense of humor, Debbie exhorted herself and everyone around her to do more than they thought they could. Her imprint on genomic medicine is profound, and she will be sorely missed."

Dr. Nickerson was a major contributor to human genomics in the years following the Human Genome Project, as investigators applied the results of that project to medical research. The Human Genome Project provided the 3 billion base-pairs of DNA sequence for a single reference human genome. To be useful for medical research, this single human genome needed to be accompanied by DNA sequences of thousands of people to reflect the vast amount of natural human variation across individuals and populations. From the sequences of thousands of healthy people, databases of worldwide variation could then be created to serve as references against which sequences of genes potentially responsible for disease could be compared. The challenges of identifying and cataloging human genetic variation were both technological and logistical and ultimately involved hundreds of scientists in laboratories on six continents.

Dr. Nickerson was one of the first to recognize the importance to this effort of sequence-based data from people from diverse ancestries. In the immediate aftermath of the Human Genome Project, genome sequencing was still too expensive to undertake for large numbers of people. Given this limitation, even before the first human genome sequence was complete, Dr. Nickerson developed methods to rapidly assay common variants for the International HapMap Project. Then, as costs of DNA sequencing plummeted in the early 2000s, Dr. Nickerson embraced the new technology. She created the first large deep-sequence-based catalog of human variation by sequencing the genes of more than 6500 volunteers. She then made the fully anonymized catalog of their variants openly available on the Exome Variant Server. Others extended this approach, and now databases of human genomic variation are used worldwide to discover genes responsible for human disease and to enable accurate genetic diagnoses of patients who undergo genetic testing.

With her colleagues, Dr. Nickerson applied DNA sequencing to discover genes responsible for human conditions ranging from cardiovascular disease to autism to severe pediatric disorders. She contributed to the identification of the gene underlying Miller syndrome, a landmark discovery using then-new technologies in gene sequencing. She illuminated differences in patients’ responses to medications by discovering genetic variation in metabolism of the blood thinner Coumadin® (warfarin). She contributed to the identification of newly arising, or de novo, genomic deletions and duplications leading to autism.

At the time of her death, Dr. Nickerson directed one of five Mendelian research centers established by the NIH to investigate genetic causes of diseases caused by severely damaging aberrations in single genes. Her lab is also a principal contributor to the NIH All of Us Research Program, which will ultimately integrate genome sequencing of more than 1 million individuals with information about their lifestyles and health.  In the context of the All of Us Research Program, her center has led efforts to return results of DNA sequencing to participants in ways that may improve their health. Her work is reflected in more than 417 original research publications, many of which transformed science's views of how human DNA sequence variation can affect human health. Based on the number of published references to her work, she was named by Web of Science one of the most highly cited scientists of the past decade.

Dr. Nickerson advocated unstintingly for women in science. Early in her career, when she was often the only woman in a room of male colleagues, she spoke up for better representation of women. She fought for a culture that would not require women to sacrifice their personal lives to pursue careers in science.  Her support was local and national in encouraging young women not to let themselves be under-valued. In parallel, she advanced the training of young scientists from underrepresented minority backgrounds. She felt that human genetics, especially, should be at the forefront in training a next generation of scientists from a wide variety of backgrounds. Her former students and postdocs are now a powerful force in human genetics and genomics.

Deborah Nickerson was born in Mineola, N.Y., on Long Island. Her parents, William J. and Josephine Nickerson, owned a garden center where she often worked as a child.  She received her B.A. from Adelphi College and her Ph.D. from the University of Tennessee. After a postdoctoral fellowship at the University of Kentucky, she joined the faculty at the University of South Florida. Her interest in the intersection of technology and immunology drew her in the late 1980s to the laboratory of Leroy Hood at Caltech. She moved with Hood to the University of Washington in 1992 and became a founding member of a new department of genome sciences.

Dr. Nickerson died at her home in Seattle surrounded by her family. She is survived by her brother Bill Nickerson and his wife Beverley, her niece, Michele Pittoni, and Michele’s children, Charles and Charlotte.

In lieu of flowers the family suggests donations to the Endowed Research Fund for Genome Sciences of the University of Washington to support graduate student travel, particularly for graduate students with fewer resources.  Condolences may be sent to Bill Nickerson, 37 Merritt St. W., Islip, NY 11795.

An online memory board has been created to view or to add your memories or photos of Dr. Nickerson.

This tribute to Dr. Nickerson was co-written by Drs. Bob Waterston, Mary-Claire King, Gail Jarvik, Evan Eichler and Jay Shendure,  and Colleen Davis, all of the Department of Genome Sciences at the UW School of Medicine. Drs. Jarvik and King are also in the Division of Medical Genetics, Department of Medicine.