Learning, memory, and movement rely on electrical signals in cells; newly obtained structure of signaling protein at rest helps explains how it works 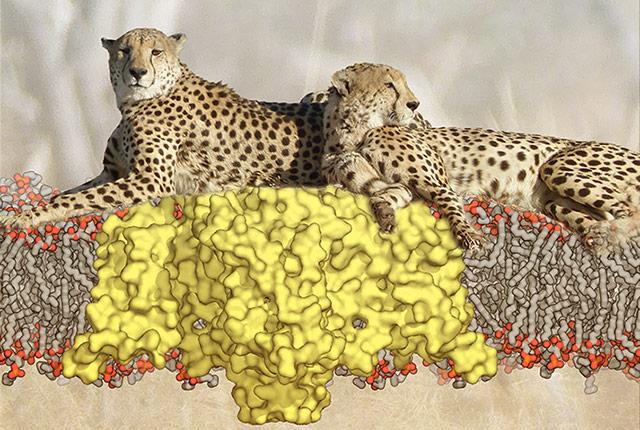 Catteral/Zheng labs
Cheetahs, the fastest animals, in a composite illustration that makes them appear to rest atop an image of a voltage-gated sodium channel, the fastest ion channel.

Researchers have now obtained the long-sought after, resting-state structure of a voltage-gated sodium channel.  These types of channels in living cells form a voltage-regulated pore that allows rapid passage of positively charged sodium atoms across the cell membrane. This generates a tiny electrical signal. Electrical signals in nerve and muscle are crucial for learning, memory, movement and many other physiological processes.

A closer look at the resting configuration of the channel revealed how it springs into action and opens its pore to conduct sodium.

“Voltage-gated sodium channels initiate fast electrical signals in nerve, muscle and other cell types as they transition from their resting state to their active state,” explained William Catterall, professor of pharmacology at the University of Washington School of Medicine.  He, along with Ning Zheng, also professor of pharmacology, led the team that determined the resting structure of an ancestral bacterial sodium channel and revealed its voltage-gating mechanism.

The results are published in the journal Cell, along with a commentary on the significance of the research, “Voltage Sensing Comes to Rest,” by Izhar Karbat and Eitan Reuveny of the Weizmann Institute of Science in Israel.   UW Medicine pharmacology researcher Goragot "George" Wisedchaisri led the project, done in collaboration with faculty in the UW medical school’s biological structure department.

While several high-resolution structures of activated sodium channels have been reported over the past eight years, it has been difficult to resolve the structure of resting channels because they are only present in the membrane of cells with large resting membrane voltage like nerve and muscle.  Preparing a sample to study by extracting sodium channels from the cells causes loss of the resting state.

The UW School of Medicine researchers got around this problem in two ways.  They engineered a bacterial sodium channel mutant with shifted voltage sensitivity.  It thereby could adopt a resting conformation in the absence of a membrane voltage.  The researchers then trapped the sodium channel in this conformation by introducing a molecular linkage called a “disulfide bond”.  By using images collected at the UW Cryo-Electron Microscopy Facility and X-ray data collected at the Advanced Light Source at Berkeley, California, the scientists gathered structural information in high resolution, even to the point of single particle analysis at a resolution substantially better than one-billionth of a meter.

The resting state conformation is particularly important to understanding how voltage gating works in these sodium channels.  The new structure revealed that voltage sensing works by a “sliding-helix” mechanism in which one transmembrane segment of the protein containing positively charged amino acids, called “S4”, is pulled inward by the electrical force of the resting membrane voltage, which is negative inside the cell.

This segment moves almost vertically and rotates slightly as its positive charges are pulled into the cell.  As they move, they exchange ion pair partners with negatively charged amino acids in the sodium channel.

The inward movement forms an elbow projecting into the cell that rigidly closes the pore by tightening a collar of protein linker segments. In this position, the resting state structure is like a cocked gun. When the cell is stimulated and the membrane voltage becomes more positive, the S4 segment moves rapidly outward, bends the elbow, and loosens the collar, which allows the pore to spring open and allow rapid sodium movement into cell. Inward movement of positively charged sodium atoms generates the electrical signal, called an “action potential”, which initiates nerve conduction, muscle contraction, and other important physiological processes.

These new observations are consistent with studies of a wide range of other voltage-sensitive proteins.  The recent findings, in striking detail, support the conclusion that the triggering of all similar electrical signaling depends on a sliding helix mechanism of voltage-dependent gating.

The conformational changes in the resting and activated structures reveal how potent neurotoxins from spiders and scorpions alter sodium channel  function to paralyze their prey, and they have implications for locating new target sites for structure-based design of drugs that would act on sodium channels.  The hope is that this might lead to a new generation of treatments for heart rhythm problems, epilepsy, and chronic pain, including intense pain from cancer, as well as improvements in local anesthetics.

This project was supported by grants from the National Institutes of Health RO1 NS015751, RO1 HL112808 and T32 GM007750, and by funding from the Howard Hughes Medical Institute.