Jiu-jitsu move may be lifesaver for trauma victims

Jiu-jitsu move may be lifesaver for trauma victims 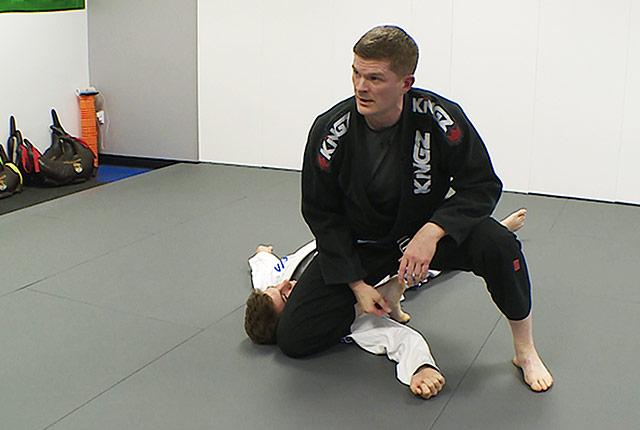 Randy Carnell
Dr. Nathan White demos a knee-mount on the mock victim's shoulder, which slowed blood flow to the arm.

A martial-arts maneuver can reduce blood loss in someone who has sustained a significant wound, suggests a small, proof-of-concept study.

The findings were published Jan. 6 in Emergency Medicine Journal.  The lead author was Nathan White, an associate professor of emergency medicine at the University of Washington School of Medicine in Seattle. [Download related video files of White's comments and jiu-jitsu demo.]

It was White who, while being subdued in a jiu-jitsu training class, recognized that the pressure being applied to his abdomen might decrease blood flow to his legs. The maneuver, called “knee mount,” “knee-ride” or “knee on belly,” is used to pin an opponent to the ground.

“This mirrors the effect of devices we’re using to rescue trauma patients who are bleeding badly from the pelvis or legs,” White said, identifying two such devices: an inflatable balloon threaded into the aorta via catheter and a belt-like abdominal tourniquet with an inflatable bladder to increase compression.

White wanted to test the knee-mount’s efficacy for reducing blood flow at the abdomen, the shoulder and groin (along the inguinal ligament, not compressing genitals, he clarified). Two UW undergrads, a man and woman, were recruited to first learn and then repeatedly apply the knee mount to 11 healthy adult subjects: nine men, two women.

“With slight modifications to the jiu-jitsu maneuver, this technique achieved an average 70 percent reduction of blood flow across the three locations, which we think is significant,” White said.

White is an emergency-medicine physician at Harborview Medical Center, the Pacific Northwest’s busiest trauma center. He is well acquainted with the national “Stop the Bleed” effort to educate community members about how to aid victims in mass-casualty events. Citizen participants are taught how to apply a tourniquet.

“It’s great that people want to know how to save lives, White said, “but the problem is that most people don’t carry tourniquets with them. Why not just drop a knee onto a vascular pressure point to slow or stop the bleeding?”

Previous research has shown that a tourniquet takes 60 to 87 seconds to apply. White’s study of blood flow velocity indicates that 1 liter of blood can be lost every minute from a femoral artery.

It’s hard to predict how unpracticed citizen responders will react in a chaotic trauma scene, White said. Even a responder well-prepared with a tourniquet may freeze up at a gushing wound and screaming victim. Dropping a knee on a pressure point may be an easy way to manage the chaos, rendering immediate aid “while the tourniquet is being accessed and you’re assessing the wound. That way, you don’t lose time and the intervention begins right away to decrease blood loss,” he said.

The team’s next step, White said, is to compare the knee-mount technique to the standard of care for first-responders who render vascular compression.

“In any of these life-saving courses to stop bleeding, they teach you to compress a wound with your hands. But studies have shown that people fatigue while applying pressure for, say, three or four minutes until paramedics arrive. The knee ride uses your full body weight, so we think it delivers more pressure with less chance of fatigue.”

The paper identified several limitations, including the lack of results involving injured humans; all subjects were healthy, lacking known heart or blood-vessel diseases that might have affected results. No testing was done of the maneuver’s effect on  pelvic or abdominal bleeding, and blood flow in other important blood vessels such as the  iliac and axillary arteries, was not measured.