The Institute for Protein Design at the University of Washington School of Medicine describes the plans for its Audacious project, announced April 16, 2019 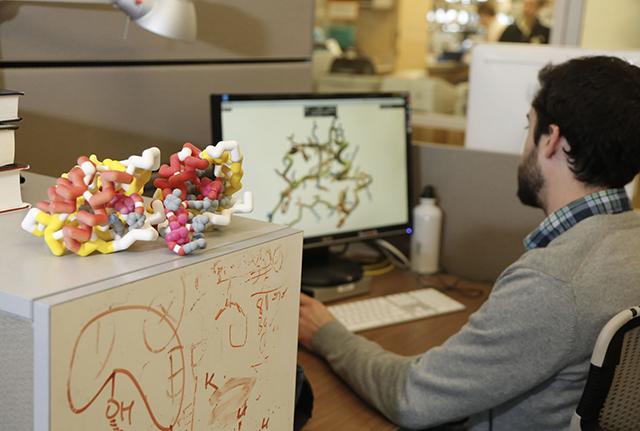 What is the Institute for Protein Design?

The Institute for Protein Design was established at the University of Washington School of Medicine in 2012 and is housed within the school’s Department of Biochemistry.  It has become a world leader in developing and applying computational and methods for designing and engineering synthetic proteins. On April 16, 2019, the IPD was named an Audacious Project at TED2019.  As of this writing, the IPD has received an initial commitment of $45 million in funding to expand its research core and take on five grand challenges in medicine and manufacturing.

What is protein design?

Proteins are the miniature machines that carry out essentially all the important functions in your body. They contract your muscles, fire your neurons, digest your food and power your immune system. Virtually everything biology does is done by proteins.

Yet because our basic understanding of how proteins work has until now remained a mystery, our species has only been able to harness the power of proteins by modifying the ones we happen to find in nature, a process similar to how our Stone Age ancestors fashioned tools from the objects around them. This is changing at the Institute for Protein Design at the UW School of Medicine.

Our audacious idea is to bring biology out of the Stone Age by designing a new world ofsynthetic proteins that address 21st-century challenges. Enabled by our scientific advances, the

rise of inexpensive computing and the genomics revolution in reading and writing DNA, we can now design new proteins from scratch, customized to serve specific functions.

Protein design is a relatively new scientific paradigm, as was computing not so long ago. This opportunity is larger than any one specific application, though there are many, including:

By unlocking the power of proteins, we will launch a whole new wave of medicines and materials with previously unimagined functions.  We hope to tap into the full efficiency, calability, and sustainability of biology.

The centerpiece of our Audacious Project will be to build a hub for discovery — the Bell Labs of protein design. During its heyday in the 1950s, Bell Labs drove the innovation in physics and information theory that laid the foundations of the modern digital era. The open and collaborative environment at Bell Labs attracted top talent.  This atmosphere made it a hotbed of scientific discovery and technological development for decades. Just as Bell Labs helped helped kickstart the digital revolution, we aim to expand our existing institute into a hub of discovery to accelerate the protein design revolution.

Innovation is hard to predict. In 1947, it was far from obvious that tiny electronic switches would change the world, yet the transistors developed then at Bell Labs now power every digital device on the planet. Bell researchers also produced the first laser, the first satellite and the first music ever heard from a computer.

Using protein design, our scientists have already created new protein switches that function inside cells. We believe these and other discoveries will, in time,

transform human health and industrial manufacturing. To make this vision a reality, we are expanding our institute . We are growing our core team of engineers and scientists to advance our protein design software.

Funding through the Audacious project will provide the human capital, equipment, supplies and laboratory space needed to design, build and characterize millions of synthetic proteins . A flat organizational structure and a maximally collaborative environment will empower every member to explore this new scientific endeavor with creativity and passion.

Beyond the institute, we also hope to engage hundreds of thousands of citizen-scientists via our Foldit and Rosetta@home projects. By the end of our Audacious investment period, a new generation of scientists trained at the Institute for Protein Design will have changed global thinking on how to solve biomedical

problems, spawned new industries, and revolutionized the way drugs, vaccines and new materials are made. In addition to being an engine of scientific discovery, the IPD will also translate our innovationsinto a range of applications — from medicine to renewable energy.  We will start  with five pressing challenges. We selected these challenges because they represent the intersection of humanity’s greatest needs and protein design’s greatest promise.

Building on our recent success in RSV vaccine design, we are working to create a universal flu

vaccine that will protect against all strains of flu with a once-in-a-lifetime immunization,

eliminating the need for annual flu shots. The same platform is also being expanded to create new vaccines candidates for HIV, malaria and certain forms of cancer.

We are going beyond nature's alphabet of just 20 amino acids to build new candidate medications for chronic pain and neurodegenerative diseases. We are also working to uncover the principles for getting these compounds into the brain.

We are creating advanced drug delivery vehicles for targeting medicines exactly where they need to go in the body. For example, directing gene-editing tools to specific tissues rather than

administering them throughout the body.

We are designing a new generation of “smart” therapeutics that can do calculations in the body and go well beyond current medications, which are really blunt instruments. For example, for

cancer, we will seek to discriminate the cancer cells from the healthy cells from which they arose.

We are developing methods for designing new, precisely patterned nanomaterials which can be applied towards solar energy capture and storage. By controlling a process called

biomineralization, synthetic proteins assemblies may one day be used in some of the most demanding manufacturing applications.

The IPD has launched five biotech companies in the last four years to commercialize its breakthroughs:

Neoleukin is advancing the clinical development of Neo-2/15, a Rosetta-designed protein that mimics the function of interleukin-2 (IL-2), a natural cancer-fighting protein. Neo-2/15 has greater potency, reduced side effects, and simplified manufacturing. Neoleukin raised $3.5M in 2018. The company expects to initiate phase I clinical trials in cancer patients in early 2020.

Icosavax was founded to commercialize the IPD’s respiratory syncytial virus (RSV) nanoparticle vaccine candidate. In 2018, Icosavax raised $4.5M to launch its Seattle operations. The company plans to initiate a phase I trial in the first quarter of 2020, and is aiming for FDA approval in 2023.\

PvP Biologics received a $35M non-dilutive investment from Takeda Pharmaceuticals to develop a novel oral enzyme therapy for treatment of celiac disease. In September 2018, PvP announced the initiation of two first-in-human clinical trials which could lead to approval of Kuma062. This enzyme was designed to cut up and neutralize gluten in the stomach before it can damage celiac patients' intestines. It has potential to become the first therapy to address the significant unmet medical need of patients with celiac disease.

A-Alpha Bio resulted from collaborative research between the IPD and UW’s Center for Synthetic Biology. Their work focused on eliminating an industry-wide drug discovery bottleneck by fundamentally changing the way that protein interactions are measured through a new

technology called AlphaSeq. This technology offers a fundamentally new way of supporting safer drug discovery, providing developers with deep insight into the effects of their drug candidates on proteins.

Cyrus enables faster, less expensive drug development and creation of other valuable materials. Cyrus is developing “Cyrus Bench,” a user-friendly software-as-a-service platform for seamless operation of the Rosetta molecular modeling algorithms for protein design with other

bioinformatics and cheminformatics tools. Following a seed financing period, the company raised $8 million  in July 2017. Today, the company has grown to a staff of 30-plus in Seattle’s South Lake Union neighborhood and has over 40 customers, including 10 of the top 20 global pharmaceutical firms, major consumer products firms, and a range of therapeutics and materials startups.

Some major advances in protein design

Researchers have known for more than 30 years that a natural human protein known as interleukin-2. IL-2 can function as a potent anticancer drug, but its toxic side effects have limited its use in the clinic. In January 2019, scientists at the Institute for Protein Design created the first-ever synthetic IL-2 protein that shows improved anticancer properties without harmful side effects in animal models. See the full report in Nature, and the accompanying Nature News & Views commentary.

Respiratory syncytial (pronounced sin-SISH-uhl) virus is second only to malaria as a cause of infant mortality worldwide. Using protein design, IPD scientists recently created a first-of-its-kind nanoparticle vaccine candidate for RSV. It elicits potent neutralizing antibodies in both mice and monkeys. Those findings pave the way for human clinical trials. This is the first of several vaccine candidates we are building using our new vaccine design platform. See the full report in Cell.

In 2008, Foldit gamers stunned the world by correctly modelling the three-dimensional structure on an important protein related to HIV. Ten years later, they have gone much further: in a

soon-to-be-published report, Suzan from Atlanta — a Foldit enthusiast with no formal scientific training — became the first gamer to successfully design a synthetic protein . This milestone shows that our protein design software has matured to where non-experts can successfully use it. It also opens the possibility of a truly global protein design revolution.