A distinct immune response is observed in people who had COVID-19 and then got vaccinated. 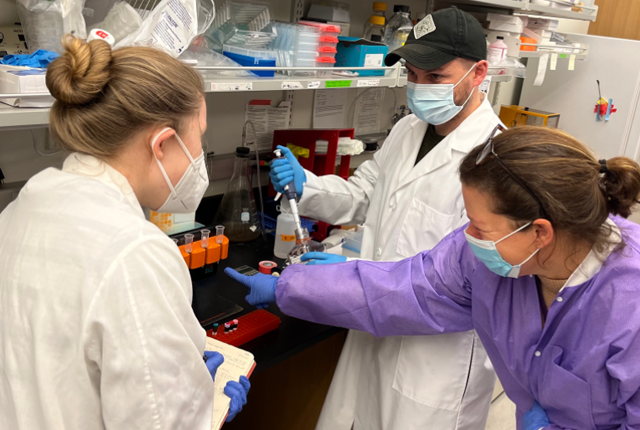 People who were infected with SARS-CoV-2 before being vaccinated generate an immune response more specific to fighting viral infections, and produce a broader antibody response, than do people whose only protection is the vaccine, according to researchers at the University of Washington School of Medicine.

“Vaccines alone work incredibly well at protecting against disease; they just don’t generate as diverse an immune response as does infection followed by vaccination,” said Marion Pepper, associate professor in the UW Department of Immunology, who led the research.

Pepper and colleagues reported their findings in the journal Cell. Lauren Rodda and Kurt Pruner, a post-doctoral and doctoral student, respectively, and Peter Morawksi of the Benaroya Research Institute in Seattle were lead authors on the paper.  Their paper is titled "Imprinted SARS-CoV-2 specific memory lymphocytes define hybrid immunity."

In the new study, the researchers sought to find out why. They compared differences in the immune response to SARS-CoV-2 over the course of three doses of the vaccine in 30 people who had previously been infected, and in 24 who had been vaccinated but never infected.

They found that, after vaccination, those who had previously been infected generated more memory B cells, which generate antibodies that can neutralize the virus and prevent infection. These memory B cells in people with hybrid immunity also generated a wider variety of antibodies that not only can neutralize the original strain of the virus but also more recent variants such as delta and omicron.

“Even if their first infection was caused by the earliest strain, the Wuhan strain, and the vaccine they received was based on that strain, people with hybrid immunity were capable of generating neutralizing antibodies against every variant we threw at them,” Pepper said.

Several factors could explain why the hybrid immunity appears more robust. One factor may simply be time. After exposure to a pathogen, immune cells in the lymph nodes refine the immune response. This immune maturation process generates antibodies and cells that are more effective against new infection.

In the case of the hybrid immunity group, a year passed from the time of infection until they received the vaccine. Individuals in the vaccine-only group, on the other hand, received their second dose just a few weeks after their first, giving the immune system far less time to refine its response.

Another factor may be where the immune system first interacts with an invading pathogen. Different parts of the body have different environments that shape how the immune system responds to infection. The immune cells of the study participants with hybrid immunity first encountered the virus in their lungs and nasal passages. Cells of those in the vaccine-only group, by contrast, first encountered the viral protein in the muscle where they received the vaccine.

It is likely that exposure in the lungs and mucosal tissues such as those found in the nasal passages generates a better immune response to a respiratory pathogen because the cells can then be better retained at these sites, Pepper said. Her group’s findings could help scientists design vaccines that take advantage of this effect, such as those that can be administered to the nasal passages or inhaled directly into the lung.

Although vaccination after prior infection appears to produce an enhanced immune response to SARS-CoV-2 infection, it is critical that people who have been infected get vaccinated to have this benefit, said Pepper. “People who had COVID-19 should definitely get the vaccine. Not only does immunity to infection wane over time, but also vaccination is required to create this hybrid immunity.”

– This news release was written by Michael McCarthy.