MAGENTA study also found no increased stress among test subjects who did not receive pre- and post-test counseling with their results. 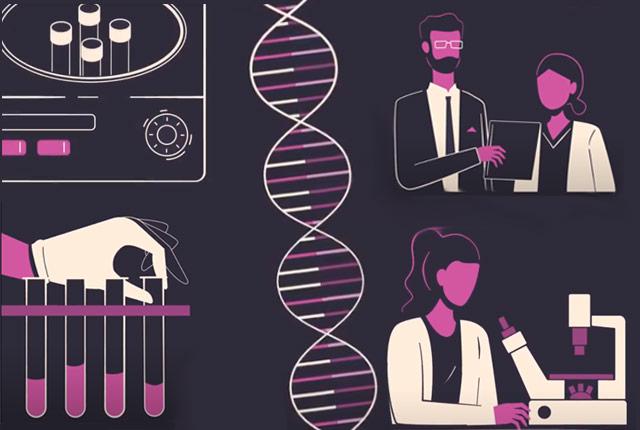 MAGENTA study
The results show that at-home testing is a viable way for women to learn whether they have a propensity for these cancers.

At-home genetic-testing kits for breast and ovarian cancer risk are just as effective, and in some cases even more so, than the typical protocol for genetic testing, which requires repeated office visits and counseling, according to a study led by UW Medicine researchers.

The results, published this month by the American Society of Clinical Oncology (ASCO), found no increased stress after genetic testing for women who did not receive pre- and post-test counseling and who received only electronic education in the three-year study called MAGENTA, or Making GENetic Testing Accessible.

Dr. Elizabeth Swisher, a UW Medicine specialist in gynecologic oncology and one of the lead authors, expressed surprise at the finding that personalized telephone counseling—in which a subject could talk with a genetics expert before and after being tested—was not necessary.

“Patients had no increased anxiety or stress if they skipped that counseling process and just received online genetic education," she said.

The results strongly indicate that at-home testing is a viable option for women to find out whether they have a propensity for these cancers, said Swisher. Her research and clinical focus is on cancer genetics and on the prevention, early detection, and treatment of ovarian cancer.

The study screened for BRCA1 or BRCA2 gene mutations, indicating a higher risk of breast cancer. It also tested for thousands of mutations in 17 other genes that increase the risk of breast and/or ovarian cancer.  Among the 3,822 participants, those with the lowest response rate were in the study arm that included counseling before testing. The testing process was more often completed by women who did not have to undergo pre-test counseling.

The report involved input from researchers at MD Anderson, the Mayo Clinic, Memorial Sloan Kettering Cancer Center, and the Dana Farber Cancer Institute.  Swisher will discuss the results May 29 at the annual ASCO meeting.

“One in 70 women will get ovarian cancer during their lifetime. It is a deadly cancer and we have no effective screening for it,” Swisher said. “Unlike breast cancer, we have no early detection, and when women get it, it is usually advanced at the time they get their cancer diagnosis.”

The three-year MAGENTA trial finished enrolling participants in December. MAGENTA provided a free home genetic test for women who were at risk for ovarian cancer by dint of family history or who had had breast cancer but not received genetic testing.  The study recently concluded the first three-month follow-up of participants; 12- and 24-month checkups will follow. The participants included women from all 50 states.

One main goal of the study was to discern whether the requisite patient experience for genetic testing—an office visit, counseling, blood draws, and then another visit—might be a barrier to participation. The study found that this was indeed the case.

Swisher said she was reminded of being in medical school in the 1980s, during the AIDS crisis, during which the testing for HIV was quite similar.

“The person had to come in for counseling, sign a consent form, get their blood drawn, and then come back in person for results and more counseling,” she said. “Now you can go to CVS and get a test.”

Swisher stressed she is not advocating for testing with ancestry and consumer DNA test kits such as 23AndMe. ”Those tests are for fun and amusement, but we were offering a clinical test on which to base major medical decisions, no different than your doctor would order to assess your cancer risk.”

The next steps will be to analyze outreach to underserved groups: those living in rural areas, who are not Caucasian, and/or did not have a college degree. Among the study subjects, 90% were white and/or highly educated.

“We’re not going to prevent all ovarian cancers through this strategy," Swisher said. “But it will help identify women at high risk before a cancer is diagnosed. There are a lot of lives we can save if we identify those women and then reduce their risk.

“Every woman who dies of a hereditary ovarian cancer is a life unnecessarily lost. I’ve lost too many of those patients myself, so making this testing more accessible for me is an opportunity to save other women,” she said.

This study was funded by Stand Up To Cancer-OCRA-NOCC Ovarian Cancer Dream Team (SU2C-AACR-DT16-15).