Folliculin gene defects are implicated in some forms of infertility, certain cancers and other cell growth disorders. 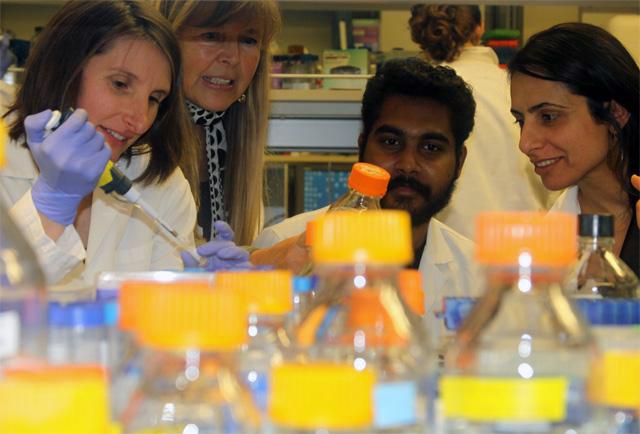 Jennifer Hesson
Researchers study genetic controls of a critical, early stage of embryonic development to try to understand a major cause of infertility. From left to right: Julie Mathieu, Hannele Ruohola-Baker, Logesh Somasundaram, and Shiri Levy.

New information is unfolding on the genetic controls of an early turning point in pregnancy. As the tiny, dividing cell mass, the blastocyst, travels from the oviduct and lodges in the wall of the uterus, the cells must exit their pre-implantation state and be ready for post-implantation development.

Failure of embryos to embed in the uterine lining is a main cause of human infertility. Many pregnancies suddenly stop at this stage, often before the women realize that they had conceived.

Important changes inside blastocyst cells are critical for guiding the pregnancy successfully through the implantation stage.

"However, today we know little about the genes that control these cells during implantation," said Hannele Ruohola-Baker, professor of biochemistry at the University of Washington School of Medicine and associate director of the UW Medicine Institute for Stem Cell and Regenerative Medicine.

She and Julie Mathieu, assistant professor of comparative medicine at the UW School of Medicine, have designed a CRISPR-Cas9 gene editing screen to study the genes involved in the pre- and post-implantation stages of embryonic development. They collaborated with Patrick Paddison, a Fred Hutchinson Cancer Research Center scientist who studies functional genomics. Their investigation started with a whole genome CRISPR screen for relevant genes.

While many genes appeared to be important to exit the pre-implantation state, they decided to concentrate on folliculin, or FLCN. This gene is already suspected of being a tumor suppressor.

"We found that when this gene is missing, cells in the blastocyst maintain their pluripotent state and can't leave it to go into their implantation stage," Ruohola-Baker said. The findings are published in the Feb. 7 Nature Communications.

"By using CRISPR-Cas9 editing to knock out this gene, we saw that the gene was not needed for embryonic development pre-implantation, but that embryonic stem cells could not move toward the post-implantation state if this gene is removed," the researchers said.

The researchers found a way to rescue the blastocyst cells from this inability to move forward into their next phase.

They did so by inhibiting the Wnt pathway - a type of cell signal, active in every branch of the animal kingdom, that regulates early development and, later, maintains body tissues. One of its roles is to tell cells to self-renew.

Experiments indicated that Wnt was a culprit in stymying the blastocyst cells whose FLCN gene had been knocked out by CRISPR editing, the researchers said.

The researchers also explained that patients with naturally occurring mutations in their FLCN gene, such as those with Birt Hogg Dube syndrome, had problems with a certain transcription factor called TFE3. Transcription factors dictate which genes are turned on to make proteins, and where and when this production can take place.

In cells with FLCN mutations, the TFE3 transcription factor mistakenly stays inside the nucleus (the cell's management center), instead of heading to where it belongs. At that point in the embryonic timetable, it should be in the cell's cytoplasm, the fluid and contents that fill other areas of the cell.

"Its presence in the nucleus of the embryonic stem cells with the FLCN mutation is somehow activating its target genes and inhibiting further embryonic development," the researchers noted. "We hypothesize that the activation of the Wnt pathways by TFE3 in the embryonic cells missing the FLCN gene prevents the cells from leaving the preimplantation state."

The researchers went on to look for the proteins that bound to folliculin. In collaboration with developmental biologist Randall Moon, professor of pharmacology at the UW School of Medicine, the team showed that the protein complexes that contained folliculin differed in the pre- and post-implantation states.

The components of these proteins were a big clue for the possible mechanisms of the FLCN gene in the implantation transition, according to the researchers.

These proteins, it turns out, are associated with the mTor (mammalian target of rapamycin) pathway, part of the survival monitoring system in cells. mTor helps cells sense a variety of environmental cues to manage their energy and nutrients accordingly. The mTor pathway is also under investigation in a number of diseases, including type 2 diabetes, aging disorders, and cancer.

That is why learning about the genetic controls, protein interactions and signaling pathways in embryonic development and infertility could also help reveal the mechanisms of diseases common in later life.

"Such research might help scientists dissect which pathways could be targeted to reverse symptoms for certain kidney cancers, some other forms of cancer and even some lung diseases," the researchers said.

The stem cell lines for this study were developed by Carol Ware, professor of comparative medicine at the UW School of Medicine, and director of the Tom and Sue Ellison Stem Cell Core Facility. Yuliang Wang, research assistant professor of computer science and engineering at the UW Paul G. Allen School, led the project's computational biology aspects. The Feb. 7 Nature Communications paper, "Folliculin regulates mTORC1/2 and WNT pathways in early human pluripotency," provides a full list of collaborators for this project.